MP fulfills campaign promise by purchasing a home in the constituency
Oct 11, 2013 12:00 AM By: Sandor Gyarmati 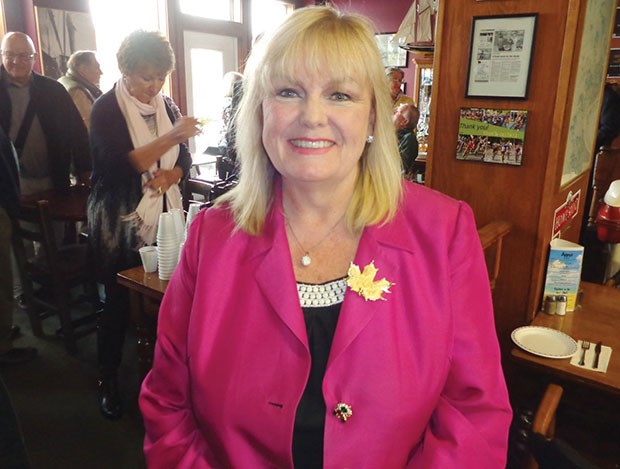 The next federal election is still a couple of years away, but the Conservatives have already found their candidate for the new riding of Delta.

First elected in 2011 in Delta-Richmond East, MP Kerry-Lynne Findlay announced Thursday she would be running here in 2015.

After making her plans known to directors at a meeting of the Delta-Richmond East Electoral District Association the night before, Findlay, who just purchased a home in Ladner, held a get together with friends and supporters at Sharkey's Seafood Bar & Grille.

The first-term MP won the riding of Delta-Richmond East two years ago by a wide margin, replacing retired longtime Conservative MP John Cummins, who also dominated at the polls during his years in office.

The next election will see a substantial change in electoral boundaries as South Delta and North Delta will merge into one federal riding.

"While I continue to serve constituents in all of Delta-Richmond East on both sides of the Fraser River in the next election I can, of course, only run in either Delta or the new riding of Steveston-Richmond East," Findlay said.

"Working with individuals and businesses with both municipalities, the provincial government and federal government departments on a variety issues continues to be a great honour for me.

"I enjoy meeting with people in Steveston, Richmond East and Delta. Their issues and concerns are important nationally as well as right here at home. I will continue to serve my constituents on both sides of the Fraser until the next election."

It's been a rapid rise in the ranks for the veteran lawyer, who most recently moved from associate minister of national defence to minister of national revenue. She was previously parliamentary secretary to the minister of justice, helping oversee a sweeping anticrime bill. Findlay's newest responsibilities include overseeing the Canada Revenue Agency.