Laid off employees at Irene Thomas Hospice in Ladner to be offered jobs
Jan 14, 2021 1:30 PM By: Sandor Gyarmati 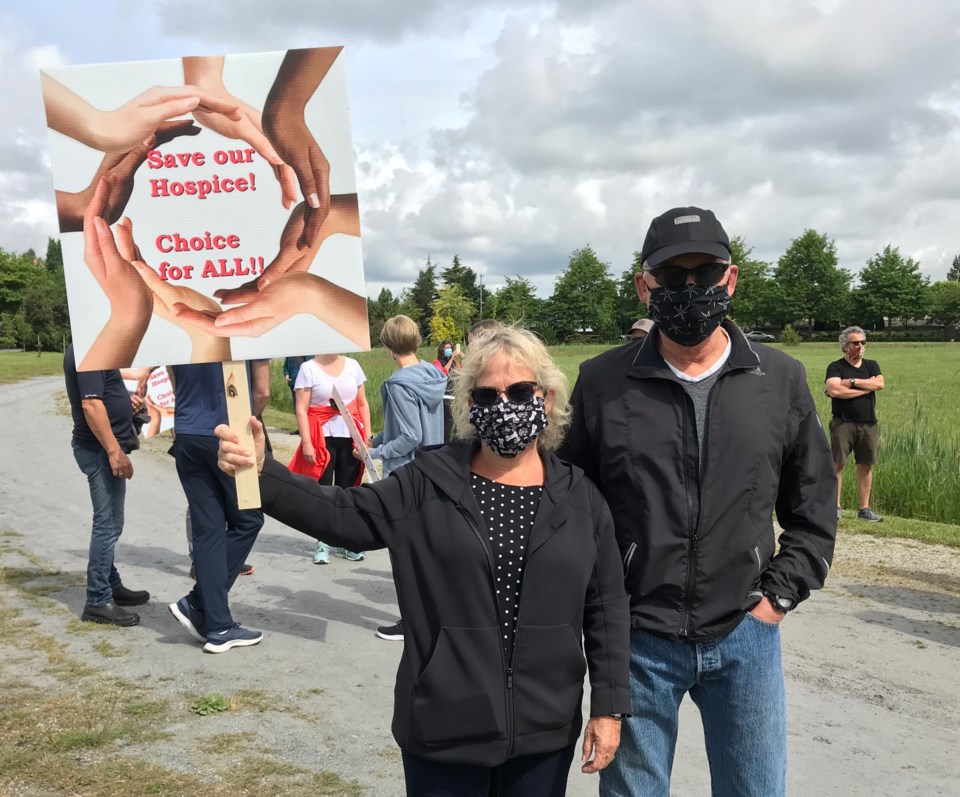 Hundreds of Delta residents opposed to the actions of the Delta Hospice Society’s board took part in a rally last June. Rejecting many membership applications by local residents, the board attempted to change the society’s constitution to become Christian-based. Sandor Gyarmati/Delta Optimist

Delta will have hospice beds once provincial funding is cut off for the Delta Hospice Society later next month.

It just won’t be at the Irene Thomas Hospice in Ladner.

In a letter today (Thursday) to residents and families of Mountain View Manor, Fraser Health said the seniors’ facility next to Delta Hospital will soon play an important role in supporting hospice care for the community.

The beds will increase to a full complement of 10 beds by mid-April 2021, while hospice patients in Delta will also have access to additional capacity available in neighbouring communities.

“To reduce any disruption for patients through this transition period, transfers to the Irene Thomas Hospice have been temporarily paused. Any person seeking hospice care between January 11 and February 24, 2021 will be admitted to another hospice. “For the duration of the notice period, patients currently at the hospice will continue to receive hospice care services with no interruptions in care. As we prepare to provide hospice care at Mountain View Manor, we will temporarily pause new resident admissions to Mountain View Manor,” the letter explained.

“Please rest assured, this care transition will not impact any members of the Mountain View care team, and we will continue to provide high-quality care to all residents at Mountain View Manor.

Fraser Health is working with the appropriate unions to ensure all unionized hospice staff who received layoff notices from the Society will have employment opportunities within Fraser Health including the newly created interim hospice unit should they wish.

Noting they are in the early phases of transition planning, the letter also stated that as part of the health region’s effort to review and expand long-term care services in Delta, Fraser Health is acquiring 59 additional long-term care beds at Good Samaritan Delta View in East Ladner.

Health Minister Adrian Dix last February announced that the DHS was given one-year’s notice that its provincial funding would be eliminated and that it would no longer be permitted to province palliative care services in Delta.

Dix also offered assurances at the time that hospice beds would still be available, either at the existing Irene Thomas Hospice that could be publically-run, or at another facility.

He also said the decision of government is final, no matter who has control of the DHS.

The FHA recently noted it has been unable to reach a transition plan with the current board of DHS.

The current board continues to refuse to offer medical assistance in dying (MAiD), having reversed a policy approved by the previous board to allow it.

In 2016, the federal government passed legislation permitting MAiD and the FHA approved its policy later that year that mandates hospices that do not have religious affiliations offer the procedure.

The Optimist has reached out to Fraser Health for additional information.

This story will be updated on-line and in print next week.

1305
Letters: People of Delta should not pay this bill
438
Dolphins Swim Club getting national and provincial attention
432
City of Delta cruise ship terminal could depend on Massey Tunnel replacement
345
Letters: Why is the word “God” still part of our national anthem?
335
Letters: How does the Premier feel about travelling to get his vaccine?