Hearing not required for latest brew pub application for Southlands

The new application must still meet requirements for form and character, the planning department explains
May 18, 2021 7:00 AM By: Sandor Gyarmati 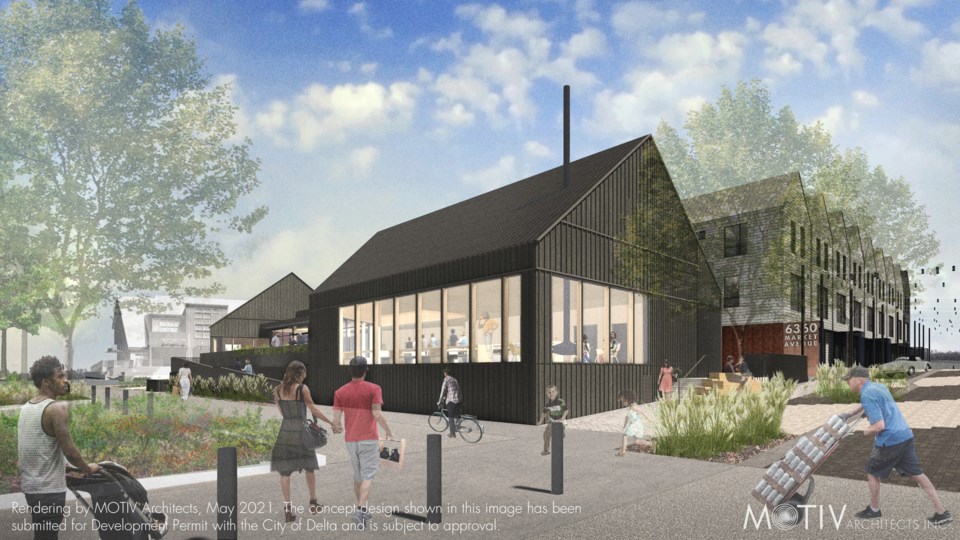 Four Winds says it has been working closely with Century Group for a number of years trying to bring a new brewery and restaurant to the development.MOTIV Architects Inc.

A new application by Century Group to build a brew pub for Four Winds Brewing Company at the Southlands has a few hurdles to clear, but a public hearing is not one of them.

That’s according to the City of Delta’s planning staff regarding the application submitted last week for a new mixed use building, which would include a brew pub, at the Southlands Market District.

The development would be anchored on Market Avenue with an 8,600-square-foot Four Winds craft brewery and restaurant. It would also contain 35 residences in the form of garden flats and stacked townhomes.

Four Winds said the brewing facility would be just under 2,600 square feet, but provides the ideal space for a small batch specialty brew house and restaurant.

The planning department confirmed that based on the application submission, the brew pub complies with the zoning regulations and therefore would not require rezoning or a public hearing.

The brew pub is permitted under the zoning, with its combined floor area limit of 250 square metres for manufacturing and warehousing, wholesaling and distribution, while all other regulations that apply to commercial uses would continue to apply.

Issuance of development permits for the Southlands has been delegated to the director of community planning and development, but the application will also be referred to Delta’s Advisory Design Panel.

In 2019, city council voted 4-3 to defeat a previous proposal by Four Winds and Century that would have seen a new brewery and eatery housed in a 30,000-square-foot building at the Tsawwassen development.

That larger proposal to build a craft brewery and 200-seat restaurant in the commercial component of the Southlands would have contained the brewing and bottling part of the operation, while the warehousing and distribution would have been handled at an industrial location elsewhere.

That application had many letters of support and mostly positive feedback submitted at a public information meeting, but most speakers at a subsequent public hearing that had a large turnout spoke in the negative.