Heroic actions of witnesses save man trapped under car in Tsawwassen 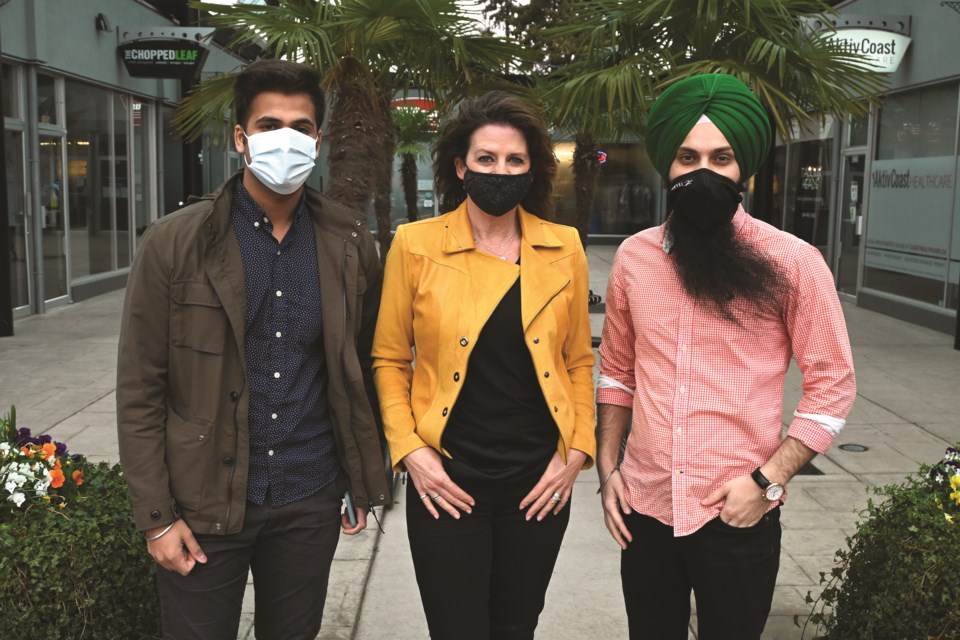 Garry Bansal, Aileen Noguer and Harry Singh were among a number of "community heroes" that acted swiftly to help a man trapped under a car after an accident in the Tsawwassen Shopping Centre parking lot on April 1. Mark Booth

Aileen Noguer was steps away from her hair appointment, while Garry Bansal was busy serving a customer, until their swift and heroic actions helped to avoid a potential tragedy.

It was around 3:20 p.m. at the Tsawwassen Shopping Centre last Thursday (April 1) when a driver attempting to park, collided with another vehicle and inadvertently ended up on the sidewalk, running over a pedestrian, in front of the Chopped Leaf restaurant. The car came to a stop on the pedestrian who was pinned under the passenger-side front tire.

The local realtor relied on her previous career as a nurse as she rushed over to the trapped victim.

“I got to him real fast and he was conscious the whole time. Someone else called 911, but I didn’t know how far away (Emergency Health Services) was and he was struggling saying his chest was hurting. I thought the best decision would be to get the car off of him,” said Noguer.

The initial thought was to try and roll the car back, but it didn’t work. About two or three other people attempted to lift up the car, but more help was needed.

Bansal was working at the nearby Open Connection cellular store and his colleague Harry Singh saw what had happened. They along with another co-worker Abhayjeet Singh and a customer in the store at the time all rushed outside to help.

“The guy was trying to reverse the car but he couldn’t. We thought of lifting the car up,” said Bansal. “One guy (from Anytime Fitness) gym came out and helped too.”

There was enough help for the car to be lifted high enough to allow Noguer and an off-duty firefighter to safely move the victim and further attend to him.

EHS arrived a short time later and the victim was taken to hospital with life-threatening injuries.

“I want to thank the people nearby who actually lifted the vehicle off of the injured man, and extracted him from under the vehicle, and began performing first aid,” says Insp. Ciaran Feenan, head of Delta Police front line patrol. “Their quick actions may have saved the pedestrian’s life. We’ve since had an update from the hospital, and he is expected to survive.”

Bansal says the heroic actions are something he will never forget.

“It was a bad situation and the first time seeing something like that in front of my very own eyes,” he reflected. “I felt so bad for him. My heart goes down every time I have an image of that accident. I’m just glad to know he is going to be okay.”

As for Noguer, she still made her appointment as her hair stylist saw first-hand why her client was late for the appointment. Noguer was just grateful how everyone stepped up and worked together.

“I think with everything going on in the world it’s important we recognize heroic behavior and I just happened to be the first one on the scene. I didn’t get a chance to say thank you to the people,” she said. “They say it takes a village and that’s what it’s all about. People stepped forward and it was wonderful to see.”