Workers at huge industrial complex taking shape near airport trade their tools for sticks
Feb 21, 2014 12:00 AM By: Sandor Gyarmati 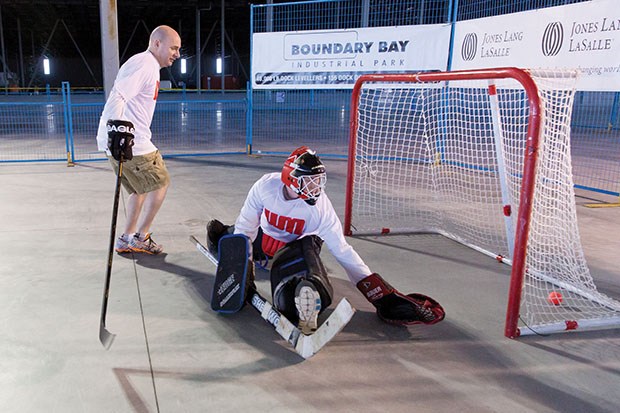 The first phase of the huge Boundary Bay Industrial Park complex in East Ladner was turned into a hockey rink Wednesday.

A celebration at the almost complete logistics centre near Boundary Bay Airport included a ball hockey tournament and a visit by Mayor Lois Jackson.

Jackson called it an exciting project that would bring big additional tax revenue for Delta and create over 1,000 jobs.

She said it's an ideal location due to the new 80th Street overpass next door, in addition to South Fraser Perimeter Road and proximity to the port at Roberts Bank.

"It really, in my opinion, is in the right place at the right time. The climate is right. I think people will be really happy with the outcome," Jackson said.

Paul Tilbury, COO of the Dayhu Group, the firm behind the project, said the first phase, which already has its first tenant signed, comprises about 440,000 square feet. Construction on the second phase, which will have the same amount of space, is set to begin this summer.

Noting the facility will help alleviate a looming shortage of industrial space in the region, he said largescale users looking for more storage volume would find the complex impressive.

"We've had a lot of interest. We're dealing with a lot of tenants who are now in their 12-month, 18-month planning cycles of looking at their existing facilities, deciding what they need in terms of space and reviewing the opportunity we present here," said Tilbury. "There is demand for more industrial space and for that you need more land. For a facility like this, you need contiguous land. The problem in the Lower Mainland is there's not many sites that are strategically located that provide contiguous acreage to be able to build to scale."

He said it's the next generation of distribution centre with greater than average ceiling heights, providing significantly more storage volume for large scale users.

Three years ago, Alpha Aviation, the company with the long-term lease to operate the airport, was looking to attract new tenants to the airport land beyond the aviation industry Delta council agreed to a request to rezone land that doesn't have direct access to the airport apron or runways for a wider range of uses, including warehousing and distribution.