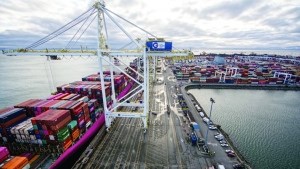 Richmond city council is asking for more information about a second proposed expansion of port facilities in Delta, but at least one councillor would like the city to take a stand against it.

Richmond city council voted 7-2 in the summer to oppose the Roberts Bank port expansion, and this week they endorsed a report highlighting concerns and asking for more information about a proposal by Global Container Terminals Canada to expand its facilities in the same port facility.

Global Container Terminals Canada is proposing a 44-hectare expansion including a larger rail system and new barge berth at the Deltaport facility.

Richmond Coun. Carol Day said she voted in favour of asking for more information, but she wants the city, in the future, to take a stand against this project.

“The cumulative effect of these projects is staggering,” she told the Richmond News.

Concerns touched on the environment, traffic as well as pressure on industrial land and will be forwarded to both the provincial and federal governments as part of an environmental assessment.

With little available industrial land, the city also wants to know how the increased cargo capacity will impact industrial land in the region, and there is a call to align with Metro Vancouver’s growth strategy.

The staff report notes the Deltaport expansion is proposed in an ecologically sensitive area, and asks what adverse effects there will be to species at risk, habitat, birds and marine animals can be avoided both during construction and when the expanded port is operational.

Furthermore, staff comments note the city depends on the Fraser River estuary for flood mitigation, so they would like the assessment to include looking at cumulative effects of the jet-fuel tank farm, the George Massey Tunnel replacement project and now this proposed expansion of Deltaport along the river.

Other concerns highlighted by city staff include noise, light, air quality and accidents and malfunctions.

The vote on the report was held at the transportation and public works committee and all five members were in favour of the motion.

A decision is on the project is expected in late 2021.