There could be hope on the horizon when it comes to protecting Delta from flooding.
Mar 10, 2019 6:05 PM By: Sandor Gyarmati 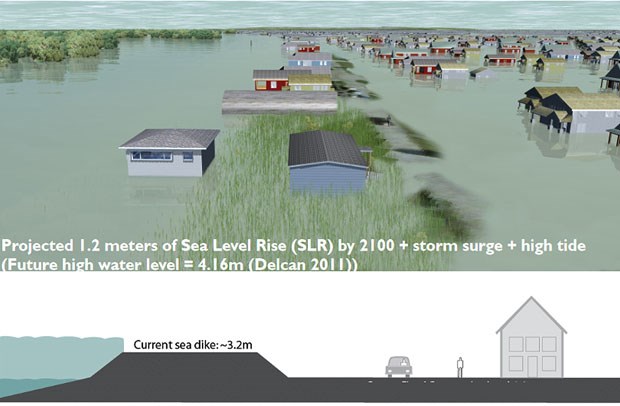 There could be hope on the horizon when it comes to protecting Delta from flooding.

Delta North MLA Ravi Kahlon last week told the Delta Chamber of Commerce things are happening behind the scenes when it comes to funding for future dike upgrades, but he couldn’t provide details.

“I’ve had many conversations with the City of Delta, staff and we have presented to the various ministers on this topic. I can’t announce today the amount of dollars… I know there’s conversations happening with the federal government on this topic on the Fraser,” he said.

“I acknowledge there are challenges and we need a long-term solution. It can’t be some dollars every year. I think we need to look at this more thoughtfully over the long-term because we are on the frontline of the effect of climate change.”

Raising Delta’s dike system to handle eventual sea level rise has been a long-time concern for the city. During a Delta council discussion on the issue last summer, civic politicians complained the city doesn’t have $2 billion to spend on such an enormous undertaking.

In a study seven years ago, the province estimated it could cost over $1.9 billion to undertake a complete upgrade throughout Delta.

Funding what's expected to be a hugely expensive, but ultimately necessary, upgrade of the 67 kilometres of dikes and seawalls protecting Delta's residential, commercial and agricultural lands is an issue council wants to see some movement taken on or at least discussed.

Having adopted guidelines that require new homes to be built 4.5 metres above sea level, Delta has already taken a number of measures, as well as taken part in a number of flood studies, while government funding has come in for a few upgrade projects.

Delta's dikes are currently between 3.4 and 4.2 metres, but there are also areas with private dikes at lower elevations.

It's estimated Delta's dikes need to be raised by at least 1.2 metres or more to meet 2100 projected levels. It's suggested a staged dike upgrading approach be implemented, since the projected sea level rise by 2050 is expected to be around .5 metres and a full metre by 2100.