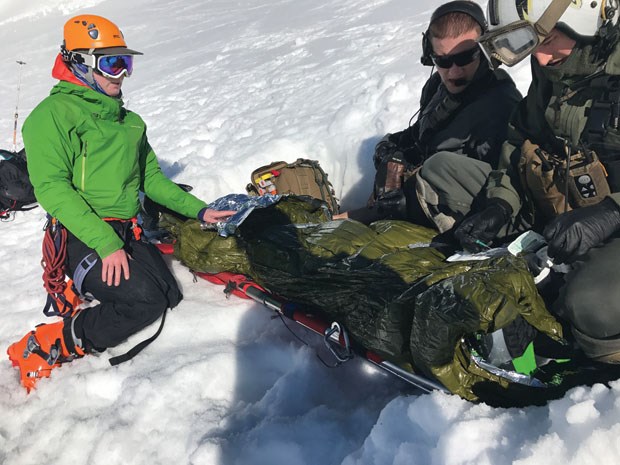 Ron Veperts is prepared to be lifted into a helicopter from the Whidbey Island Naval Air Station after falling into a crevasse while skiing at Mount Baker in Washington state last Sunday.submitted

Ron Veperts is thanking his lucky stars after a skiing accident last Sunday afternoon that saw him fall into a 90-foot crevasse on Mount Baker.

The 58-year-old from Ladner, an experienced skier and outdoors enthusiast, was with a group skiing the volcano’s western slopes and was descending the main climbing route on Coleman Glacier when he got into trouble.

He said there were nine people in the party and they had broken into small groups for the descent.

“I just made a judgment error and skied a little bit in the wrong direction and before I realized it I was in a bad situation. My ski pre-released and I slid into the crevasse,” Veperts said. “It was a bit foggy and I didn’t notice that crevasse on the way up, so it didn’t register coming down.”

He said when he hit the crevasse he thought it was over.

“I was bouncing from side-to-side, but I had a heavy, padded pack on and my helmet, so it was just pure luck. The pack probably saved me from some serious injuries,” he said.

“It’s pretty frightening when you are lying there in the dark and you have no idea how badly injured you are, but fortunately I was able to move everything. When I heard them calling for me, I called back and it was a relief that they heard me.”

Veperts said another group that was climbing and skiing in the area saw the accident and immediately came to the group’s aid.

“There were two other guys and they took control of the situation and got me out,” he recalled. “I was OK and walking, but then I passed out because I had bumped my head pretty good. When the rescue team arrived I was coherent, but they gave me a shot and all I remember was waking up in the hospital.”

Veperts was treated at St. Joseph Hospital in Bellingham before being transferred to Royal Columbian Hospital in New Westminster. He ended up with a concussion and bruising, but no broken bones.

Whatcom County Undersheriff Jeff Parks said they received a 911 call at 3:43 p.m. Parks said the caller was able to hike to an area with cell phone service to tell them that Veperts had been removed from the crevasse, but was unable to make it back down the mountain.

“Once we had all the information, we dispatched the naval rescue team into the area,” said Parks. “From what I understand it was a pretty routine rescue call.”

“It’s a wilderness, backcountry area that people will trek, climb up the glacier and then ski down. You always run the risk of natural hazards down the mountain,” said Parks. “It sounds like between the ski party he was in and the other group, who I believe were from Portland, they had the means to get him out right away.”

“One of the things our crew did before they took off was remove gear that they wouldn’t need to allow them to get more power in the air,” said Welding. “It seemed to go pretty standard once they got there and were able to get him into the litter and into the helicopter.”

According to the Bellingham Herald, Sunday’s accident was at least the third incident in the North Cascades in the past two weeks.