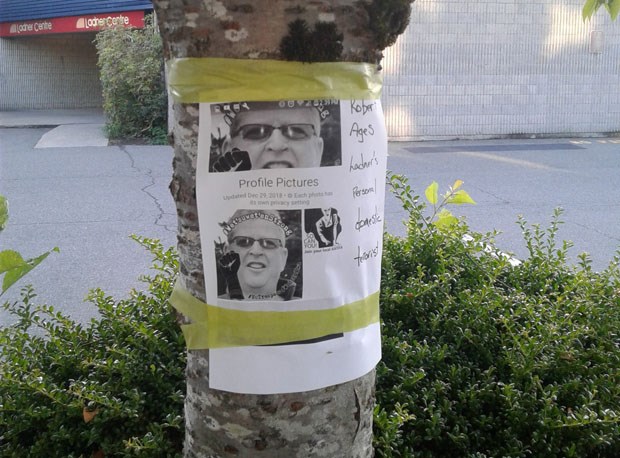 Ladner's Bob Ages had his face on posters plastered near his home that labelled him as an Antifa organizer and a domestic terrorist.courtesy Bob Ages

A Ladner man has been targeted by what he describes as members of a neo-Nazi network.

Bob Ages, who has been involved with social activism in Delta for more than 15 years, had his face on posters plastered near his home that labelled him as an Antifa organizer and a domestic terrorist.

“The posters went up on my block of 52A Street on Sunday. My neighbour saw them and alerted me,” said Ages, who reported the incident to Delta police before taking them down.

“It would be easy to dismiss these guys, but they are a part of a broad network of neo-Nazis that is stretching across Canada and all over the United States,” said Ages, an active member of the Council of Canadians as well as the Peace Bearers

“It’s not so much about me. I can laugh it off, but it’s a story about a growing influence and size of far right neo-Nazi fascist elements.”

Two weeks ago, Ages said he was targeted online, and through an online technique called Doxing, was followed to his home, which is why he suspects the people responsible now know where he lives and why the posters were put up so close to his home.

“It would be hard to find a more respectable, mainstream community activist than myself,” he said. “It just goes to show that no one who supports and defends racialized and marginalized people is immune from being targeted by the far-right that is unfortunately growing in Canada.”

In his role with the Peace Bearers, Ages has encountered some neo-Nazi supporters at events for the LGBTQ+ community.

Ages has also advocated in the community for the protection of the port and agriculture issues, as well as for immigrants who now call South Delta home.

“We have seen them at some anti-racism events as well. There is a video on CBC news of me blocking one of these guys from attacking people in the crowd, including MP Jenny Kwan, so that puts them off,” he said. “We stand there in our yellow vests with our Peace Bearers logos and it thwarts their efforts to intimidate people.”

Following the two incidents, Ages has provided all his documentation to Delta police.

“The police have been very supportive and said they would flag the file as a high priority,” he said. “These people have now gone from social media to being feet away from my home. This is a growing threat, not to just me, but to all of us. To target a retired Jewish accountant as some kind of terrorist? These people live in a fantasy world.”