The Ladner homeowners are concerned about the root system pushing up the sidewalk and driveways as well as the potential of falling limbs
Jul 20, 2021 1:33 PM By: Sandor Gyarmati 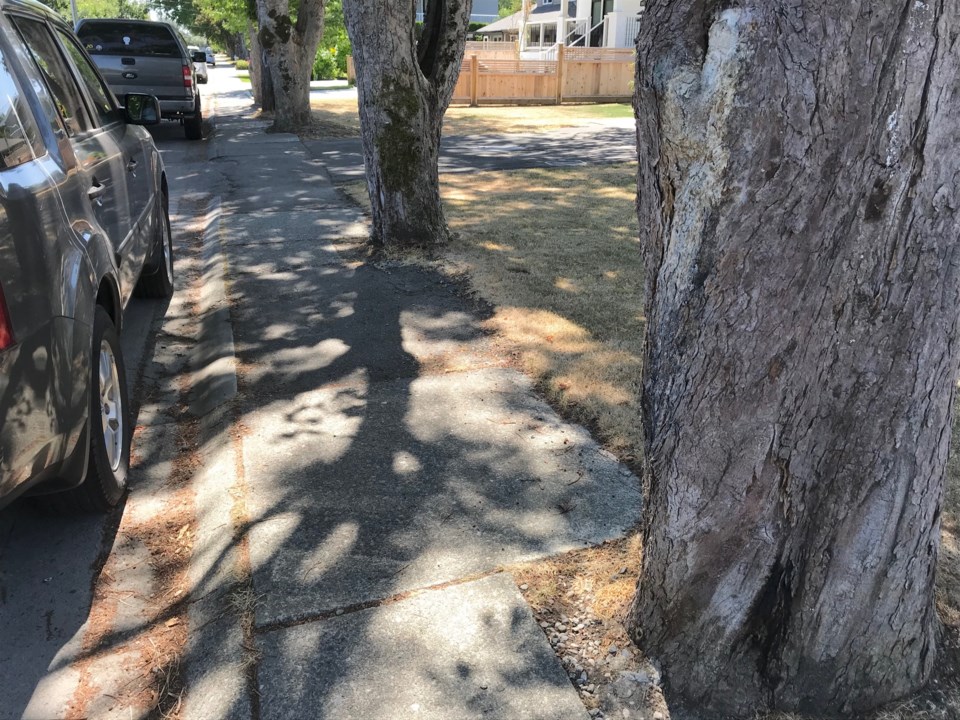 The trees are said to have impacted the current sidewalk, causing uneven pavement and pedestrian safety concerns.Sandor Gyarmati/Delta Optimist

The owner of new Ladner home is in a dilemma about large maple and chestnut trees damaging their sidewalk and driveways.

The 54A Street homeowner has been requesting the removal and replacement of several existing trees which have been pushing up and damaging the sidewalk and driveway, saying it was not disclosed to them, nor their neighbours, that the frontage of their houses would be drastically altered.

A City of Delta staff response to a recent letter by the homeowner notes the city is planning to install an off-set sidewalk in front of the property which was created through a three-lot subdivision and rezoning approved by council in 2016.

The trees on municipal property, which were to be retained as part of the redevelopment, are in close proximity to the existing sidewalk and the tree root system has impacted the current sidewalk, causing uneven pavement and pedestrian safety concerns.

The approved new sidewalk design, which was supported by the rezoning applicant’s arborist at the time of redevelopment, provides the necessary off-set to protect the trees, provides for better growth conditions and lowers the impact to the proposed sidewalk from tree roots, the memo notes.

City staff have delayed the sidewalk replacement for several months to review the concerns and options, and retaining an external arborist to review the health of the trees.

That review found the trees to be in fair condition and not expected to decline significantly in the next five-to-10 years.

“Staff have informed the residents that retention of the city trees was part of the approved rezoning which went through a public process and received council approval. The City would be responsible to monitor and maintain the trees as we do other municipal trees,” the memo states.

During council’s discussion last week on the 54A Street situation, it was agreed to have staff come back with a report on the situation.

“I think we need some flexibility with the types of trees that we’re planting adjacent to public sidewalk space for that same reason,” said Kruger. “I just think it’d be really unfortunate if we enforce this new configuration and in five years from now we’re back because the same problem has happened on the newly configured sidewalk space. Is there merit in perhaps cutting that off early and allowing for new appropriate trees to be planted on the street and allowing the continuity of the sidewalk space?”

Mayor George Harvie said he’s concerned about the 54A Street sidewalk’s safety, adding he wonders how long those trees will safely stand.

Hundreds of trees to be removed, replaced at Tsawwassen's Winskill Park
Jun 2, 2021 5:00 PM