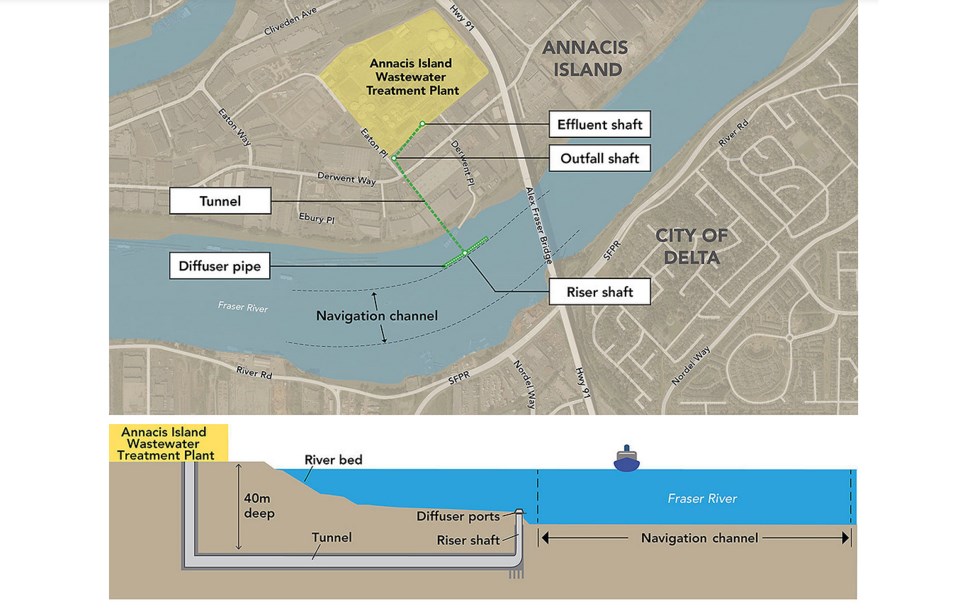 Noise complaints from North Delta residents has prompted Metro Vancouver to change its work schedule for a major project at the Annacis Island Wastewater Treatment Plant.

The regional district has been installing a new pipe, but the use of a diesel hammer after 9 p.m. drew a number of complaints on social media as well as directly to the City of Delta.

The city yesterday posted directly to the North Delta Community Corner Facebook page that it became aware of the noise issue late on Tuesday and was “very concerned” about the impact on the community.

Mayor George Harvie and staff connected with their Metro counterparts, noting that the project was approved by Delta but that the noise was “far beyond” any city approvals, and steps were being taken.

The company undertaking construction said that it would be altering the schedule.

Wastewater from the plant is released into the Fraser River through an outfall pipe once it has been treated.

The regional district notes a new outfall location and diffuser system is being installed, which will involve constructing a tunnel approximately one-kilometre long from the plant to the river.

The new outfall location and design will ensure that treated effluent is dispersed over a broad area underwater to maximize dilution and minimize the impact on the environment, Metro explains.

The regional district also notes that the new pipe is expected to meet the region’s growth needs for the next 100 years while ensuring greater seismic resilience and continuous, reliable and safe management of liquid waste.

Work is expected to be completed by 2023.

550
Here's what real estate prices look like in the City of Delta
523
Ladner Baseball hosting used equipment drive for start-up league in Mexico
455
Your credit report may be wrong; here’s what to do about it
405
B.C. premier throwing cold water on COVID-19 vaccine clinic for North Delta
383
East Ladner motel has been buzzing with filming activity