Rentals.ca says since interest rates began to rise in March, the average rent in Canada has increased by 9.2 per cent.

Burnaby's rental market is still hot, according to a new report.

Rentals.ca's November national rankings released today (Nov. 16) showed Burnaby is still the third most expensive city to rent in Canada and prices have gone up once again as rising interest rates turn people away from home sales.

"In the period since March when interest rates began to rise, the average rent in Canada has increased by 9.2%, which compares to a nearly equivalent 9.9% decline in benchmark resale prices between March and October as reported by the Canadian Real Estate Association."

The report also shows the average rental price in Burnaby has increased 29.7 per cent in the last year — the biggest jump compared to the rest of the country — with studios going up 6.5 per cent, one-bedrooms 29 per cent and two-bedrooms 24.8 per cent. 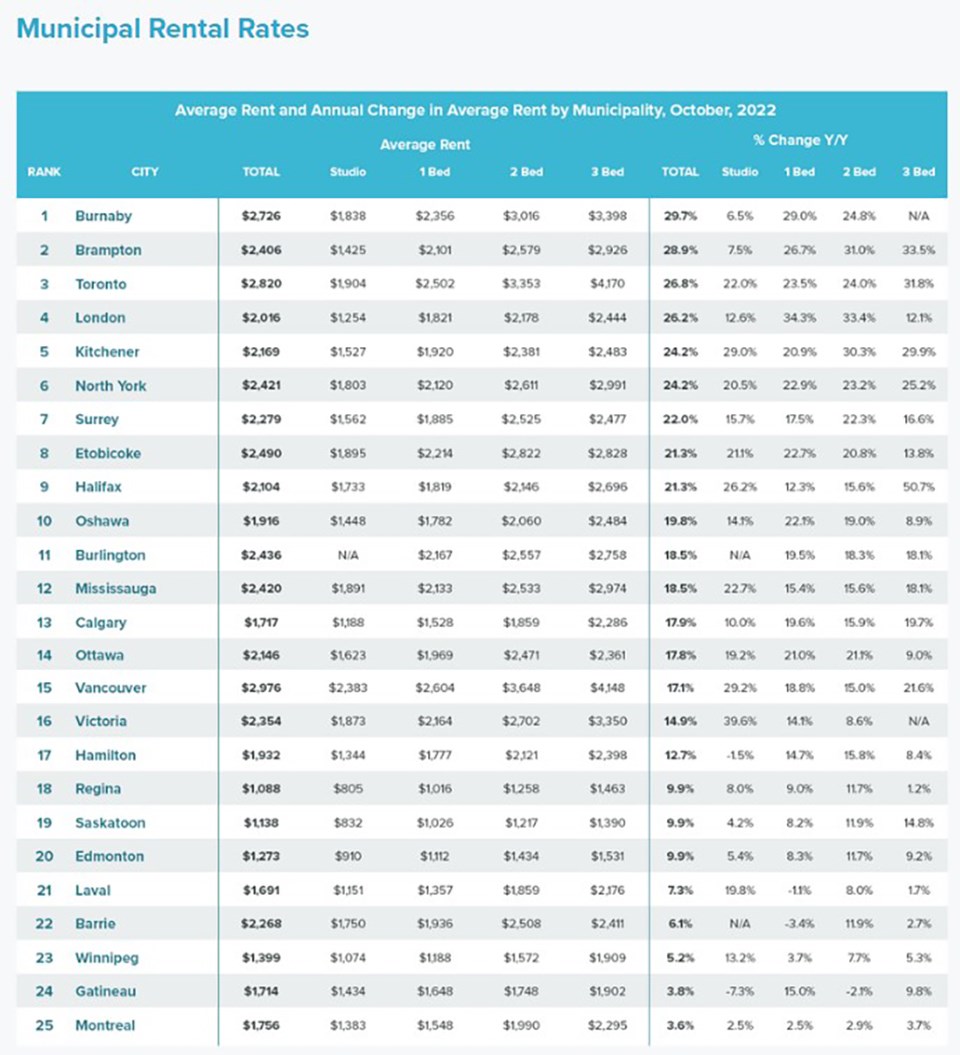 B.C. is still the most expensive province to rent from with the average cost of rent sitting at $2,433. Ontario is second at $2,372 per month.

According to the Real Estate Board of Greater Vancouver's (REBGV) October report, residential housing sales in the region were 1,903 last month which equated to a 45.5 per cent decrease compared to October of 2021 when 3,494 homes were sold.

However, last month's numbers were a 12.8 per cent increase compared to the 1,687 homes sold in September this year.

"Inflation and rising interest rates continue to dominate headlines, leading many buyers and sellers to assess how these factors impact their housing options," Andrew Lis, REBGV's director of economics and data analysis, said in a news release.

"With sales remaining near historic lows, the number of active listings continues to inch upward, causing home prices to recede from the record highs set in the spring of 2022."

As of last month, Burnaby East saw a benchmark price of $1,125,900 (+1.1 per cent compared to September of this year) for residental/composite homes.

Burnaby North saw a benchmark price of $1,946,300 in October (-0.6 per cent compared to September of this year) for single-family detached homes.

Townhomes also saw drops in all three Burnaby regions with Burnaby South at a benchmark price of $942,300 (-1.3 per cent compared to September of this year).