Pet oxygen masks put to use for the first time

Delta firefighters used their new pet oxygen kits to help save a pair of dogs rescued from a kitchen fire in North Delta earlier this month.
Oct 19, 2016 12:00 AM By: Ian Jacques 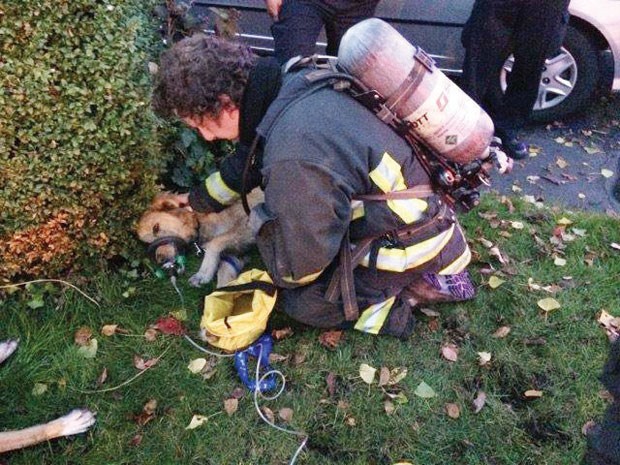 A firefighter administers oxygen to one of two dogs rescued from a North Delta house fire.submitted

Delta firefighters used their new pet oxygen kits to help save a pair of dogs rescued from a kitchen fire in North Delta earlier this month.

The department received the kits through a donation from the Delta Scottsdale Lions Club in May and up until now had not had the opportunity to put them into action.

"It's a pretty amazing tool," Scholfield said. "In the past we would have had to make-shift a human oxygen mask, which really doesn't work well on dogs. These masks made a big difference. This actual mask fits right over the dog's snout, so they are getting 100 per cent oxygen, which in this case brought these dogs back to life."

Scholfield said the fire was called in on the evening of Oct. 7. Delta bylaw officer Leon Farrell, who made sure the lone female occupant of the building was evacuated, first noticed the fire.

"The woman was pretty panicked and tried to get back into the building to save her pets, but the bylaw officer held her back fearing for her safety," Scholfield said. "He did a great job and should be commended for his actions."

When firefighters arrived they quickly knocked down the kitchen fire and brought out the two dogs and two cats. One cat was deceased; the other cat was alive, while the two dogs were in severe respiratory distress.

"One dog started perking up right away from the oxygen while the other dog took quite a while before it did come around," Scholfield said. "Around an hour later Delta Animal Services and a veterinarian technician took over and both dogs are expected to make a full recovery."

Scholfield said the department is very thankful for the donation and the fact it now has this specialized equipment at its disposal.

"We are pretty excited about the kits and how they worked."