Pirates of the Caribbean star draws a crowd while filming new comedy-drama movie Saturday
Aug 16, 2017 12:00 AM By: Ian Jacques 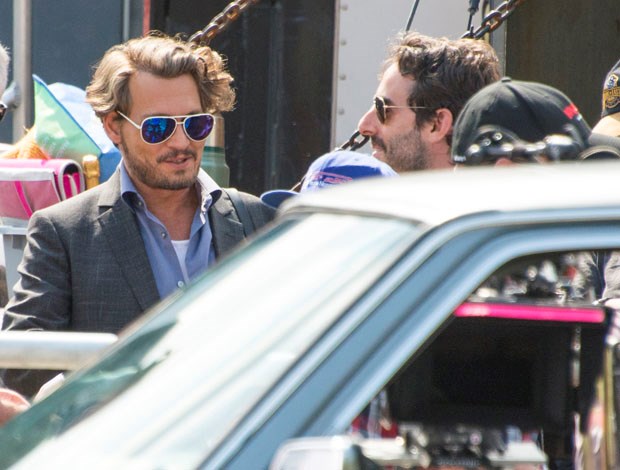 Johnny Depp was in Ladner Village Saturday working on a new film. The big name actor drew a crowd of onlookers hoping to catch a glimpse.Adrian MacNair

Johnny Depp fans flocked to Ladner Village Saturday afternoon for a chance to catch a glimpse of the Pirates of the Caribbean star in action.

Depp has been shooting in and around Vancouver since last Tuesday on his latest film Richard Says Goodbye, a comedy-drama in which the actor plays a college professor who decides to binge through every vice out there after receiving a life-changing medical diagnosis.

Filming continues in the Lower Mainland until Aug. 25. The movie is scheduled for a 2018 release.

Depp is no stranger to Vancouver. He was here last year filming a few scenes for Pirates of the Caribbean: Dead Men Tell No Tales and early in his career filmed the popular TV series 21 Jump Street in the Vancouver area.

Fans Leslie Sharp and her friend Lori Winichuk said they saw a Facebook post that said "Johnny Depp ate at the Dancing Pig for free."

This alerted them to the fact the mega star was in town and went for a walk and found the film crew.

Neither said they were surprised to see a big name actor in Ladner because of all the filming that has happened here lately.

Dancing Pig owner and Ladner Business Association president Andrea Frustaci said the Facebook post was a joke, partially in an attempt to lure the actor to his restaurant, but more to inform residents he was in town.

He said all LBA merchants received notice of the one-day filming so it was a subtle way of letting people know.

Ladner's Jim and Jackie Cardwell were driving by when they saw a crowd gathered around and wondered what was going on.

"We were on our way to Sharkey's and I thought maybe it was a parade," said Jim. "So I asked one of the security people and he said, no, no, we're filming. And I said, oh, and then somebody else said Johnny Depp's going to be here. So, we thought we'd go and watch."

The couple are fans of the actor and were thrilled to see him in town.

The past few weeks have seen a filming boom in Ladner.

She said the film office is projected to surpass last year in terms of the productions filmed and the dollars generated. In 2016, Delta had about 100 productions and generated $170,000.

"With Ladner Village closed off last year due to the Delta Street construction now that the area is fully open, production companies have been flocking to the area to film," Oujla said.

Other popular locations have been the North 40 and the Boundary Bay Airport.

"Those two locations as well as Ladner Village are prime locations that production companies can dress up as sets. The Village is stunning and can be utilized in so many ways. It almost looks like a movie set already," she added. "The farm community is also very popular, so Delta ticks off so many boxes."

Oujla said in general production companies have a good relationship with residents and the business community.

"I think in general our residents and the business community embrace the film community," she said. "We also have a very thorough consultation process in order to get a film permit here. We have to poll neighbours and get their consent, so that cuts down on complaints, but again, if there is a complaint, we deal with it immediately. Production companies know that we have a residents'first policy, so it is certainly in their best interest to leave a good impression and work together."

Frustaci said the LBA and its merchants generally always have positive experiences with the movie crews.

"We usually get people coming in to dine that work for the crew, so we can see a tangible benefit of the crews being in town," he added.

-With files from Adrian MacNair