The Delta Police Board met for its regular meeting on Tuesday morning and during its open public question period addressed a number of questions about the ongoing RCMP investigation into the wife of Chief Neil Dubord.
Jun 30, 2020 1:00 PM By: Ian Jacques 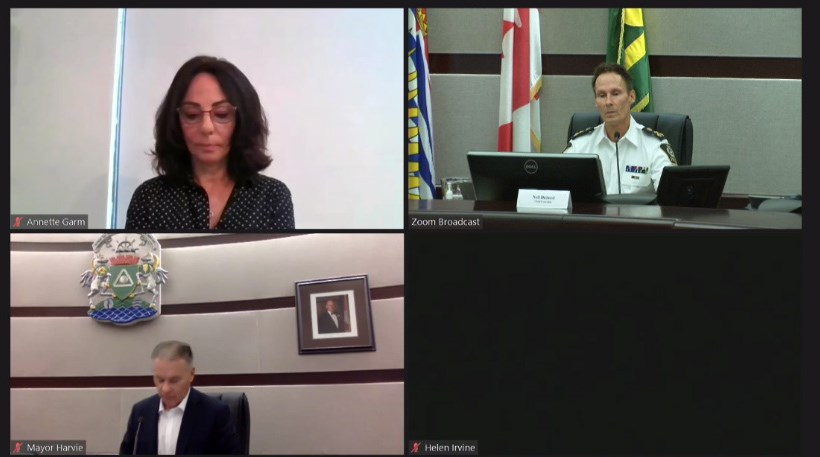 The Delta police board met for its monthly meeting on Tuesday morning. The public could watch the meeting via Zoom. This screen shot does not show all board members who were taking part in the meeting.

The Delta Police Board met for its regular meeting on Tuesday morning and during its open public question period addressed a number of questions about the ongoing RCMP investigation into the wife of Chief Neil Dubord.

Delta Mayor George Harvie and chair of the police board, opened the Q&A session with a statement.

“The purpose of this meeting is to address concerns from the community regarding the incident from June 7 involving the Chief of Police Neil Dubord’s partner and a member of the public,” said Harvie. “Today’s discussion is an opportunity to hear from the community and listen during this critically important time, particularly as society and police forces are coming to terms with addressing issues of transparency, accountability and systemic racism. More specifically, we recognize you will have questions when a senior office has a family member involved in an investigation. The board is committed to transparency, to our community and we want to ensure that both the board and the public have an opportunity to hear from the Chief and the department and to ask questions.

“Beyond today’s meeting, the board knows we need to continue to listen to the community. We need to learn about the realities and impacts of systemic racism in both our community and our institutions. Ultimately we must work together to make changes and build relationships that will better our entire community.”

Dubord then read out the prepared statement that was issued on Monday and then the Q&A session began with Dubord, Harvie and Deputy Chief Norm Lipinski providing answers.

The following are the questions posed by the public directly speaking to the investigation.

Q: What is the protocol for notifying the police board of a complaint against the Chief Constable or their family?

A: “When a complaint is received against the Chief or in some way maybe related to the Chief, the senior command staff is notified in order for the Chief to recuse himself as was done in this situation,” said Harvie. “Either the Chief or a member of the senior staff will inform the chair of the police board. I would like to state that the late notification to the board members is an error by myself and I have addressed this directly with the board members. I would state that board members have had the opportunity to be informed on the actual complaint and the investigation process and have any questions addressed by our senior officer Norm Lipinski.”

Q: Does the Delta police department have officers trained in mediation? If so when the complainant was advised that no charges would be recommended was she offered an opportunity to meet with the homeowner to seek some common ground?

A: “Pertaining to the file I can’t speak to the investigative steps there, but I will speak to, that all our members are very skilled in communications and de-escalation and mediation and that happens every day to a number of calls that our members go to,” said Lipinski. “When we have our training, I think the first thing we look at people is their ability to listen and to empathize with the parties involved in terms of mediation and ask the open-ended questions and paraphrase, summarize and getting to a conclusion. This could occur in a variety of different calls, property crime, a disturbance somewhere, so the members of the Delta Police Department are very skilled in that and we re-affirm that every year through our yearly training schedule.

Q: In his public statement, Chief Dubord said: ‘I want to say unreservedly that the matter at hand in no way reflects the values and commitment to the community of the officers of the Delta Police Department nor my own values. I wonder if the police Chief could describe specifically which of his own values or those of his officers were not reflected in the matter at hand.

A: “The actions involved in the matter do not reflect my own values or the values of the Delta Police Department,” said Dubord. “What I can say without speaking specifically to the investigative steps is that trust, specifically public trust, is important in policing, is important to all the Delta Police Department and is certainly our number one priority. This matter in itself has brought forward the fact that the same excellence in policing the public has come to expect they can expect in all investigations as they can expect in this one, which public trust is the important key factor that I was speaking too.”

Q: Are that large rocks on the beach dumped their illegally? Are the rocks public property, municipal property or property of the Chief of Police and who is responsible to ensure they are safe?

A: “The rocks are not dumped there illegally. Rocks are common along the beach walls throughout Tsawwassen in this case Centennial Beach, Boundary Bay and are there to provide additional protection for the seawalls during our winter storms and we have had in the past seawalls collapsing, which causes risks and flooding for the neighbors’ right behind,” said Harvie. “So far as this piece of property, they were done in accordance with the building permit that was issued by the City of Delta. Are the rocks on public property? Yes they are.”

Q: What actions are being taken by the Delta Police Department to prevent unacceptable conduct by those related by marriage or otherwise to members of Delta police? I would appreciate instances of specific actions and not broad plans.

A: “As a general statement, the Police Act of BC regulates police officers,” said Lipinski. “There is no regulation pertaining to any member of a family of a police officer other than the oversight of the various statutes and criminal code, that applies to every member of society, so that is to say that the family members of any police officer, they are subject to the rules and expectations and conduct that is embodied in the criminal code or the highway traffic act or the bylaws. They are civilians and I want to differentiate between civilians and police officers.”

Q: Is there actually going to be accountability? We all know the answer is no, so how is this time going to be any different?

A: “In reference to this incident, I think it is important for people to know that established practices have been followed,” said Lipinski. “When this incident occurred, it was initially assigned to a constable, but then was given to a supervisor, further, a senior manager was assigned to oversee the investigation and to ensure that all proper procedures were being followed. I must say that this level of oversight is not standard practice, but I felt was required given the nature of the matter. Then as the investigation follows through its steps, it came to the point where the complainant was not satisfied with the conclusion and as such, then the opportunity there presented itself to give the investigation over to an independent party – the RCMP – to conduct a file review. The file review means they look at the investigative steps and they look at the conclusions that were drawn. I can’t speak to that because it is still outstanding, but I do want to say that accepted practices and policies pertaining to investigative steps were followed and if there is not a successful conclusion from the complainants’ perspective as was the case, it goes to a third party to review the entire matter.”

Q: What services have been given to the physical assault victim?

A: “I can’t speak to the investigation, but I will speak generally, that we do have a victim services unit and they are very much engaged in a variety of calls, especially when we are talking about collisions and members come onto the scene and there are victims there that witness horrific incidents. They are very busy and do provide a lot of comfort to many people who may have seen something or were involved in a particular occurrence,” said Lipinski.

Q: Is it normal in a case where the accused isn’t under threat of violent retaliation to issue police guard and restrict access to public areas around the accused home? Why were police stopping people from getting into Centennial Beach yesterday (Sunday) afternoon?

A: “The parks are regulated by Metro Vancouver. The open or closure of the parks have nothing to do with the Delta Police Department,” said Lipinski. “The incident here, specifically at Centennial, the park was closed because it was full. Our role is simply traffic control and to assist in the vehicles entering or leaving.”

“The park was not actually closed it was the parking,” added Harvie. “That has happened numerous times and will happen every Saturday and Sunday probably until Labour Day. It has been noted in the media that the City of Delta is working with Metro Vancouver to ensure there is opportunities for a reservation system and other transport to the park. I want to emphasize that the park was never closed – it was just the parking because it was full.”

Other questions that were received after the posted 7 p.m. deadline Monday night have been forwarded to the police board for their review and there will be a response to the writer for each of the questions.