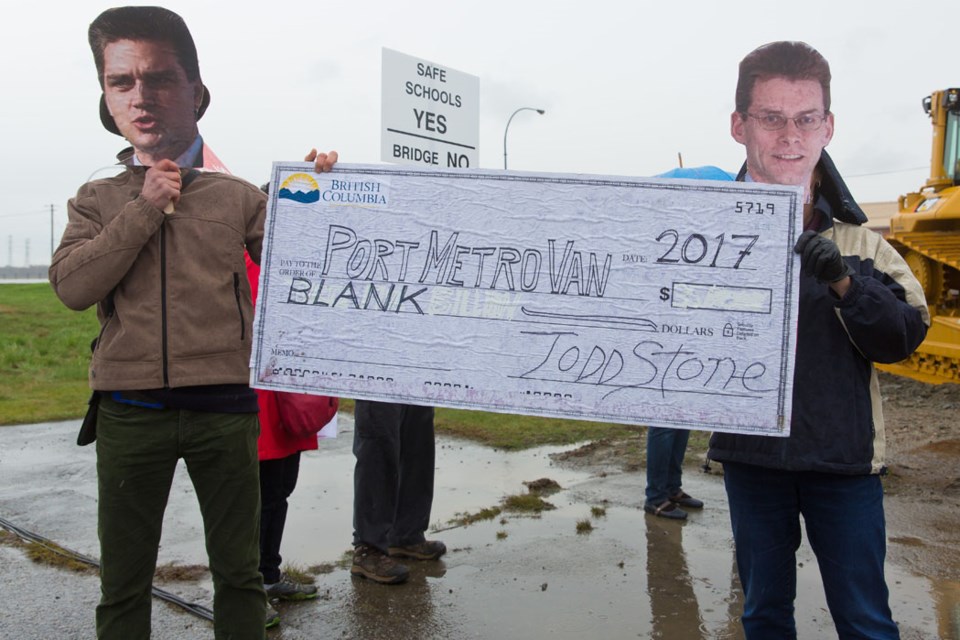 It was supposed to be a celebration of the start of construction of the George Massey Tunnel Replacement Project but protestors had something else in mind.

Around three dozen opponents, including members of the Council of Canadians and Fraser Voices, were on hand at the Delta Fire Hall 4 in East Ladner Wednesday morning to make their presence loud and clear at the scheduled government announcement, which was to include a shovels-in-the-ground photo op for the media.

Transportation Minister Todd Stone, joined by Mayor Lois Jackson and others, were to speak outside but the boisterous protestors, several carrying placards and one determined to make full use of his megaphone, prompted officials to cram the press conference inside the fire hall.

“The entire Lower Mainland, the Mayors' Council as well, is completely opposed to this project. It’s a 10-lane bridge that’s going to cost a fortune as a result of a request from the port. We’re promoting the idea of adding another tube with the tunnel,” said Lynn Armstrong with the Council of Canadians.

Noting the project has received Agricultural Land Commission approval, Stone told reporters that he respected people’s right to protest but it was also clear today was really the official start of the provincial election campaign. The same individuals loudly chanting outside will be at other events, he predicted.

Stone then went over at length the many attributes of the project, adding much technical work has gone into analyzing it and that there’s overwhelming public support.

Stone also categorically rejected the notion the tunnel was being replaced to accommodate Port Metro Vancouver, which isn’t contributing to the project, saying large ships aren’t able to turn around in the Fraser River anyway.

Jackson also defended the project, recalling how Delta was calling for a replacement 30 years ago. Citing seismic concerns, she said the bridge is the best way to go to address the growing needs of Delta, Surrey and the increasing population south of the Fraser. She also thanked Premier Christy Clark “for her foresight and vision.”

Coincidently on Wednesday, members of the regional Mayors' Council, including Vancouver Mayor Gregor Robertson, held a press conference in Surrey, calling on Victoria to complete a 10-year vision for rail and bus service across to help “cure congestion.”

The regional district and most other Lower Mainland mayors, including Richmond Mayor Malcolm Brodie, have voiced opposition to the $3.5 billion bridge plan.

Stone noted the province is spending billions in other transit investments, including matching federal funding recently announced for a series of other big projects in the region. He then reiterated the bridge project is about creating jobs as well as reliving the worst congestion point in B.C.

“We’ve had 125 meetings with Richmond alone. We’ve had dozens of meetings with Metro Vancouver. They sat on the environment assessment panel. They were involved in the Agricultural Land Commission process. They have been plugged in throughout this whole process,” he said.

“I would suggest that if this project, this bridge, was a TransLink asset, like the Patullo Bridge, the mayors would have included a replacement of this project in their 10-year plan. They didn’t and I didn’t expect them to because it is not a TransLink asset….We have talked about this project, we have consulted with British Columbians, including mayors for over five years. Five years of talk. It’s time to move on to action. It’s time to build this bridge and alleviate this congestion point and put 9,000 people to work here in the Lower Mainland as well as get on with this project that’s really going to improve the quality of life for everybody.”

Following the conclusion of the press conference, protestors waited outside the fire hall office for Stone to exit, but he eventually slipped by them by leaving through one of the bay doors and into a waiting pickup truck.

Police were on hand but there were no incidents at the event, where the groundbreaking was cancelled.

The tolled bridge, which includes an extensive series of road works, is to be completed in 2022. Stone said the toll will be in line with whatever is being charged at the Port Mann Bridge at the time.