Residents, businesses sound off over film crews at Ladner forum

Better communication is needed if businesses and residents are to co-exist with the growing film industry in Delta. That was the prevailing feeling expressed by numerous people at a public meeting Tuesday night at Harris Barn in Ladner.
Jan 15, 2020 11:35 AM By: Ian Jacques 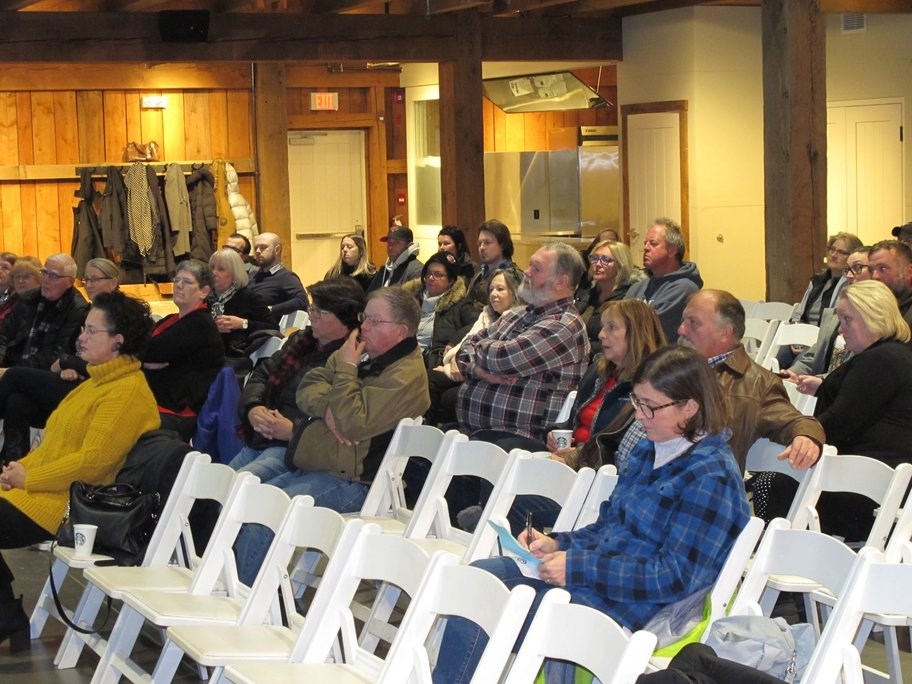 More than 50 residents and business owners were on hand at Harris Barn in Ladner Tuesday night for a public meeting on the film industry in Delta. The meeting was hosted by the City of Delta and Creative BC.Ian Jacques

Better communication is needed if businesses and residents are to co-exist with the growing film industry in Delta.

That was the prevailing feeling expressed by numerous people at a public meeting Tuesday night at Harris Barn in Ladner.

The City of Delta hosted the forum along with representatives from Creative BC to open a dialogue with those who have experienced challenges dealing with film crews in the past year.

“Hopefully we can provide some education here tonight, get your feedback, answer your questions and then report back to council,” said city manager Sean McGill. “We know that there have been concerns.”

Delta staff gave a presentation on the permitting processes, while Creative BC provided background on the organization and the role it plays in the industry. Then the floor was opened to questions from the 50 or so in attendance.

South Delta Heels owner Carol Miles was the first to speak. She said it’s hard to do business at the best of times, but when film crews come to town, it makes it even harder.

She said last year her Ladner Village business was shut down during the Tour de Delta bike race weekend, and then was shut down again as a film crew rolled into town on Monday.

“Within that three-week period there was movie shoots back-to-back. In fact, I had two location managers in my store at the same time looking to make a deal,” she said. “It’s really hard when the film crew comes to town and says you won’t know we are here. I show up and it’s never what they said it was going to be. Sometimes the crews are good and other times they are not so good.

River Road West resident Justin Haddin said he has had major issues with film crews from Supernatural, which filmed near his home in the last year.

He said he contacted Delta on numerous occasions to express his concerns, but his emails and calls were ignored.

“Most of the local crews are really good, but that is because they live here,” he said. “Supernatural, they were absolutely awful to us. We haven’t gotten any help from Delta. Delta has to set perimeters when you approve these permits.”

“It was probably the worst I have ever seen,” she said. “Most of the film crews that come to Ladner have been fantastic. They have been fair, but every now and then we do get a thorn in our side. When I ask for compensation, I want fair compensation. I asked for $250 a day and I don’t think that is unreasonable. Supernatural refused.

“Not all film crews are like this. I realize how much the film industry contributes to the economy and I want to support that, but when we have the occasional crappy crew come in we need support. We need support from Delta, support from the industry and from the crews.”

Marnie Orr of Creative BC said she would be speaking to Warner Brothers about the Supernatural crews, assuring residents that all their concerns would be addressed.

Location manager Mitchell Gutman said dialogue is important to ensure the growing film industry does not have negative impacts on any community.

“It’s not a perfect system. There are constantly going to be changes and improvements and that is why we are all here – we want to make the industry more accountable,” he said. “The industry will need your patience, but know that we in the industry are very aware that these sensitivities exist and we are actively trying to improve them.”

McGill said negative interactions with film crews should not be happening.

“Your concerns are valid and are being heard,” said McGill. “I’ve heard your frustrations and I take it to heart. The priority is our residents and our businesses. We know we need to do better and we will do better.”