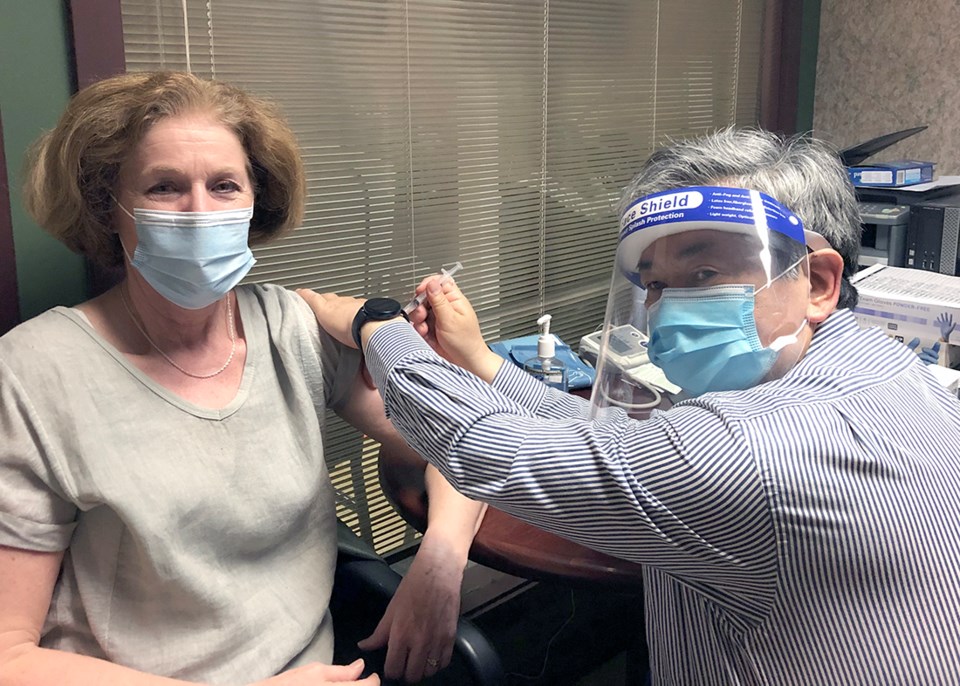 Yvonne Anderson is one of many South Delta residents that have taken advantage of the AstraZeneca COVID-19 vaccine being available at local pharmacies.

The Delta Chamber of Commerce board chair was grateful to be inoculated ahead of schedule after the provincial government changed course and made the vaccine available for those in the 65-to-55 year-old demographic. The AstraZeneca doses were originally destined for first responders, teachers and other frontline workers until reports out of Europe raised concerns of potential rare blood clots for those under 55. The latest information has since changed to those under 30 potentially being at risk.

“I really believe there is lot of misinformation. I was very well versed. I had gone online and looked up everything. The upside of getting the shot is significantly better than the downside,” said Anderson who received her AstraZeneca dose on Wednesday. “We really need to be part of the solution not the problem. Any person that can get out there and get the shot helps move us further toward herd immunity.

“The only way we are going to get back to our new normal is to get people out there vaccinated.”

Many apparently feel the same way as Anderson.

Tsawwassen Pharmacy owner Edwin Lee received a phone call at home on Good Friday if his store was interested in participating in the expanded AstraZeneca rollout. It didn’t take long after before eligible residents began calling.

“The phone was ringing off the hook and it was non-stop,” said Lee. “All 100 doses were accounted for and we took appointments for (Wednesday) and (Thursday). We have a waiting list but we really don’t know when we will get our next supply. This one was the last minute.”

Lee, who has been serving the community for more than 40 years, has received the Pfizer vaccine. However, he would have been fine with any of the four currently approved in Canada.

“I personally know a few people that are hesitant about AstraZeneca,” continued Lee. “They have said they wouldn’t get it if it comes to their time simply because from what they have seen in the media. If it was me, I would take it. Look at the United Kingdom where it’s the main vaccine with over 18 million people having received it and there were six cases of blood clots reported.”

Lee added too much is also being read into Pfizer and Moderna both being more effective of protecting against getting COVID-19.

“You shouldn’t be worrying about (potentially) getting mild symptoms. The main thing is avoiding hospitalization and death and that’s what AstraZeneca does,” he said.