The proposed term of the agreement between Southpointe and Delta is 30 years
Jun 12, 2021 7:00 AM By: Sandor Gyarmati 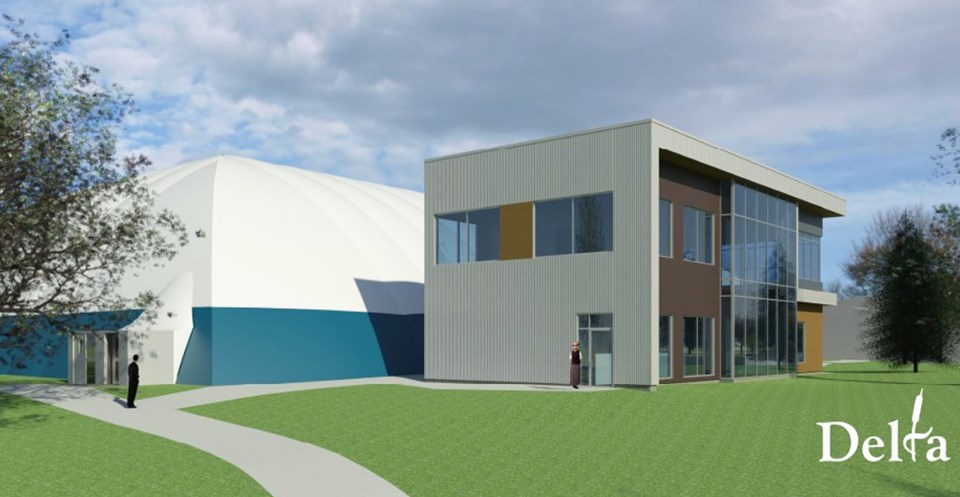 Two-thirds of the dome’s floor area would covered with synthetic turf and one-third covered with a hard court surface. The proposal also includes a 3,800-square-foot support building which would include such amenities as change rooms and washrooms.City of Delta report

The City of Delta is providing more details about a proposal to build a $4.5 million joint use recreation facility with Southpointe Academy.

Following council’s decision last week to proceed to the public consultation stage, the city has started gathering feedback, as well, will hold a virtual public meeting on June 21, to see what residents have to say about the proposed domed facility at Grauer Park.

The Tsawwassen private school approached the city earlier this year about the possibility of having a new indoor facility situated north of the South Delta Recreation Centre, where the lacrosse box and playground in the park are currently located.

According to the city, the 36,000 square foot facility would provide year-round weather protection for sports such as pickleball, volleyball, soccer, hardball, lacrosse, badminton, baseball and more.

The facility has the ability to accommodate multiple sports at the same time.

The community would have access to the inflatable sports dome during times of peak demand, such as weekday evenings and most weekends, representing approximately 60 per cent of the total time available, the city explains.

Southpointe Academy would be covering construction costs of the facility and a support building, while Delta would provide the land and cover an estimated $1 million in capital costs.

The city also notes the proposed license agreement would provide Southpointe with the "first right of use" of the recreational facility during school days, from September to June, between 7 a.m. and 5 p.m., as well as a four-week period in July and August on school days, from 8 a.m. to  4:30 p.m.

Southpointe would also be able to organize one tournament, from Friday evenings to Saturday, per month when needed.

The playground currently located north of the lacrosse box would be relocated within the park.

The facility would be owned by the city which would be responsible for operating and maintenance.

The agreement would be in effect for 30 years.

Tsawwassen synthetic turf playing field to be replaced
Jun 3, 2021 7:00 AM

Hundreds of trees to be removed, replaced at Tsawwassen's Winskill Park
Jun 2, 2021 5:00 PM