Squamish BMX prodigy back for third season with NextGen squad 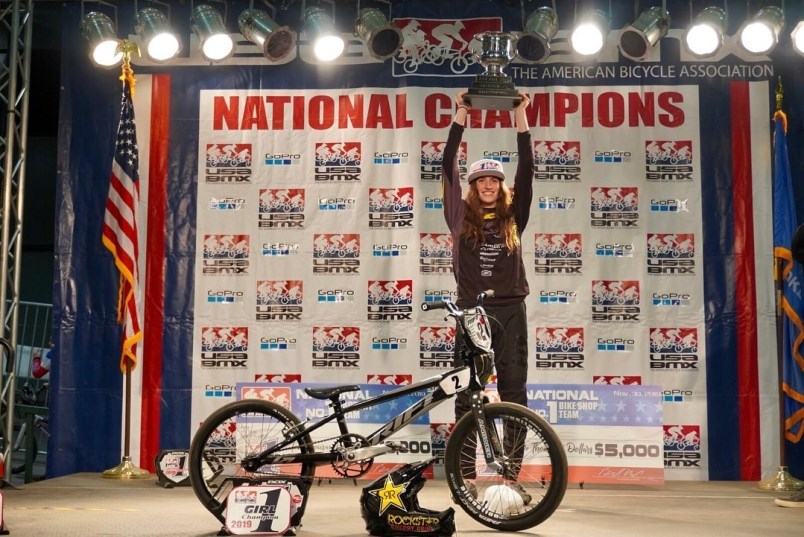 Teigen Pascual will represent Canada as part of Cycling Canada’s NextGen team for a third consecutive season in 2021. Here she celebrates her victory as first foreigner to win U.S. BMX title in Dec. 2019.File photo/U.S. BMX

Coming off a spectacular 2019 season in which she became the first non-American to claim the USA BMX top amateur girl crown, Teigen Pascual was set to make another leap forward in 2020.

And the 17-year-old got off to an encouraging start to retaining the title, winning Nationals races in Phoenix in February and Houston in early March before the pandemic shut down the border and limited Pascual's participation in the stateside races.

But Pascual pivoted, delving deep into training to become a better all-around rider in her second season as part of Cycling Canada's NextGen team, which recently announced that she'll be part of the 2021 squad as well. From there, Pascual will look to earn a spot on Canada's Olympic team and line up at the start gate in Tokyo next summer.

"Working up to the Olympics in Tokyo next year is a big goal," she said. "The national team has helped me so much with just being able to get access to racing and more knowledge of what is out there."

Pascual will also hope to resume racing at USA BMX contests and put herself back on top in the women's 17-to-20 division while also aiming for as many World Cup starts as possible.

Through her involvement with the NextGen program, Pascual said that she's had access to additional training and travel opportunities to grow as an athlete and represent Canada.

This summer, with racing cancelled, Pascual had even more time to integrate herself into the team at its sessions in the Fraser Valley, making friends with her fellow riders along the way.

"I've been able to get to Abbotsford lots to ride the supercross hill with the national team, so I've been in Abbotsford a lot," she said. "There was a lot more training just because there wasn't any racing to prepare for.

"I've been working a lot on my skills, my track speed throughout this year, so jumping, manualling, all that type of stuff. I'm really working on training on the eight-metre hill."

Off her bike, Pascual trained heavily at CrossFit Squamish to improve her overall strength and fitness.

While she's hoping to be back to racing action in 2021, Pascual acknowledged that the uncertainty surrounding her return to competition was difficult to fight through this summer. However, she sought to focus on the bigger picture of her overall progression and what she's gained as opposed to what she's missed out on.

"It's been hard. Not knowing what you're training for is kind of a big thing," she said. "But it's allowed me to really work on things that I probably wouldn't have had time for when you're racing all the time.