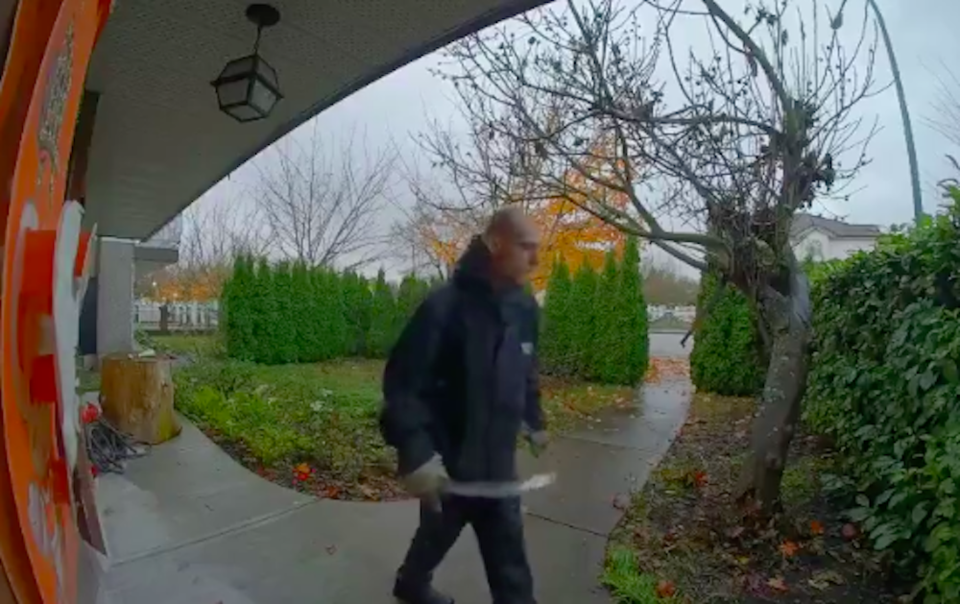 Surveillance footage of a man brandishing a machete in Vancouver is circulating on social media.

The footage, which has been shared in multiple chat groups, shows a man dressed in all black walk up to the front of a home. He repeatedly rings the doorbell, and at one point he turns around and slashes his machete downwards.

The incident reportedly took place around Rupert and 41st Avenue.

Vancouver Police Spokesperson Tania Visintin tells Vancouver Is Awesome in an email that VPD received three 9-1-1 calls on Nov. 25 about a man with a knife in the yards of three different homes in South Vancouver.

"Our officers responded, located the man, and took him into custody for 'breaching the peace,' she writes.

"Officers noticed that the man appeared to be impaired by drugs, and at that time, he was not in possession of any weapons."

The officers took him to his home in the downtown eastside, as he was found to "no longer breaching the peace and was not a threat to the public," adds Visintin.

"It is not uncommon for police to release an individual while continuing to investigate."

At around 3 p.m. the same day, the same man walked into the Vancouver Court Community Corrections office where he breached his court-ordered conditions. He was then taken to jail and will remain there until his next court appearance.

Later in the day, Visintin notes that a resident near the area where the man was initially taken into custody, found two knives in their outdoor flower pots.

VPD will continue to investigate to see if additional charge recommendations are appropriate.