The designation for the area is intended for single-family, duplex, townhouse, rowhouse and other forms of low-rise multiple-family residential.
Apr 6, 2021 7:00 AM By: Sandor Gyarmati 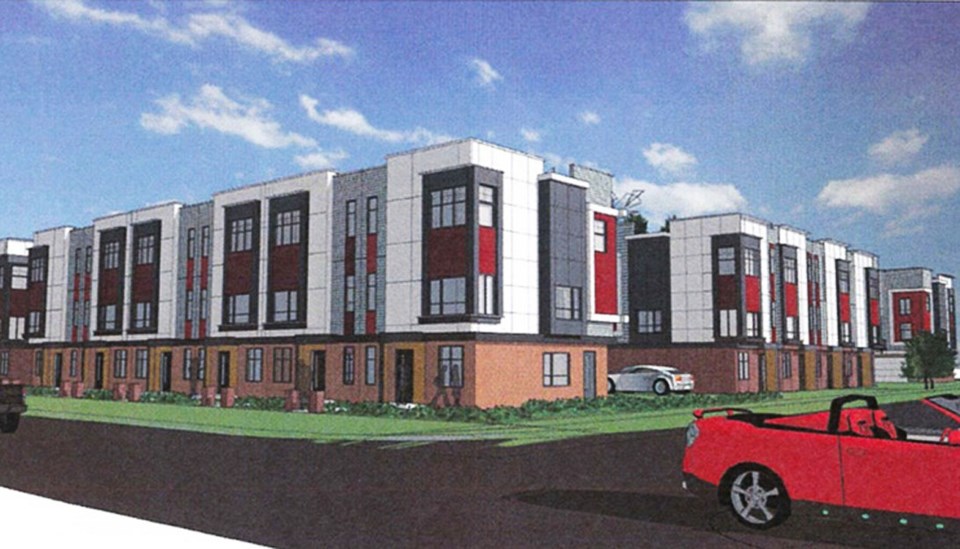 Delta councillors when this original townhouse design was presented last December immediately balked at the proposal.City of Delta report

It was too ugly the first time around, but a submitted revised design may be more acceptable.

Delta council last week agreed to send a revised application to build a 35-unit townhouse development, across the street from North Delta Secondary, out for community consultation.

The application would see seven, single-family lots bounded by 83 Avenue on the south, 115 Street on the east and 83A Avenue on the north, consolidated into one to build the complex in eight buildings.

The site would be accessed from two driveways on 115 Street.

Planning staff note that the drive aisles could potentially be extended to adjoining lots to the west should they be redeveloped in future.

When an initial application was presented to council last December, the design immediately drew a negative reaction as being unacceptable. The applicant was asked to revise the plan.

“The proposal initially featured a contemporary design in bold colours. The grouping of townhouses into separate buildings was intended to mitigate massing along the street and provide easy pedestrian access into the site. There was minimal information on how the design would fit in to the neighbourhood context, how units would be distinguished, and how the building facades would relate to the street. The proposed materials and landscaping were also not clearly noted on the renderings,” a planning department report notes.

The application is at a preliminary stage and aspects may change in response to detailed staff review as well as council or community comments.

Should council advance the application, complete details of the proposal including site layout, building and landscape design, neighbourhood context and project phasing would be provided in subsequent reports, the planning department adds.

Public to have say on proposed Tsawwassen apartment building
Apr 4, 2021 10:36 AM
Comments