Upgrades planned for 'one of the most dangerous roads in Delta' 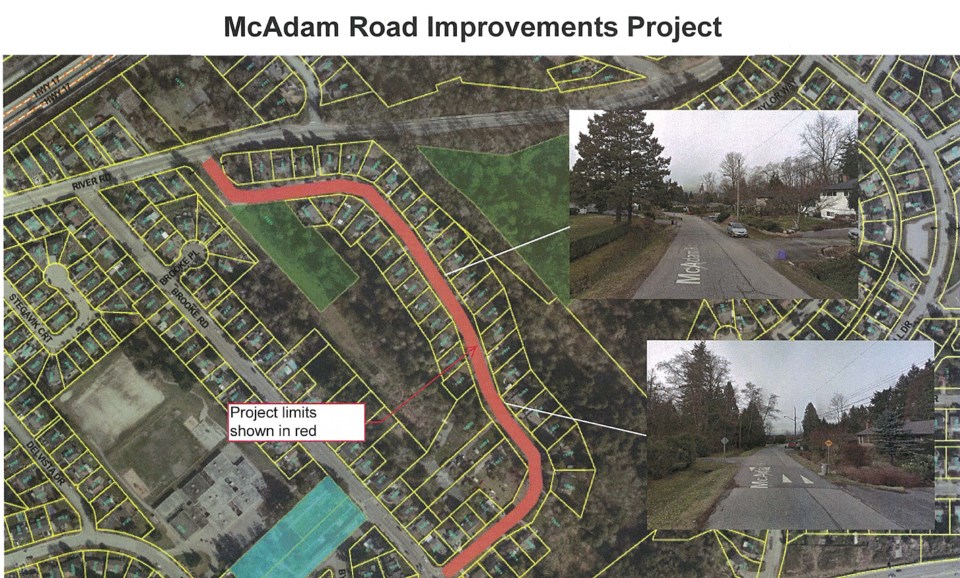 Built in the 1950s, McAdam Road has several grade changes and blind curves.City of Delta report

A North Delta roadway described as one of the most dangerous in the city is going to undergo upgrades.

Council last week agreed with an engineering department recommendation to consider funding for the design work required for the McAdam Road Neighbourhood Road Improvement Project at the 2022 Corporate Priorities Workshop.

It has variable pavement widths with gravel shoulders on both sides.

A staff report notes that, similar to many roads throughout Delta, it was built to the standards of the day, with no sidewalks and roadside ditches for managing storm water.

There are two existing speed humps for traffic calming.

Council received a petition from more than 40 homeowners. Following receipt of the petition, engineering staff took a site visit, meeting with some of the residents to discuss their concerns.

The report notes residents requested that Delta provide sidewalks, street lighting, ditch infills and rehabilitation of the pavement on McAdam Road, similar to the Neighbourhood Road Improvement Projects completed elsewhere in the community.

Based on the community request, the engineering department proposed to initiate a design for the road improvements, which would include filling in roadside ditches, installing curb and gutter, sidewalk, LED street lights, pavement markings and utility upgrades.

The residents’ petition states the road is unsafe for traffic and pedestrians.

“McAdam Road was designed and built in the 1950s, to 1950 standards, levels of traffic and population. The road itself has several grade changes and curves. Two of the curves are about 90 degrees, which allows a very limited view, jeopardizing vehicles and worse pedestrians. These hazards need to be mitigated. It is time for McAdam Road to be made safe. We look to you as our city representatives to do so,” the petition states.

There was agreement among council that safety improvements are needed.

“This is one of the most dangerous roads in Delta and, unfortunately, it sort of escaped all the local improvement programs over the years. But the traffic is increasing there because people have found this as a shortcut route through there. There’s a number of blind spots. There’s no sidewalks. It’s dangerous to walk there at any time. So, I’m hoping council supports this as a priority to go through insofar as the process,” said Mayor George Harvie.