Smaller classes with more space and an opportunity to see your child’s progress from close range. What sounds like attractive selling features are actually the new reality for the Delta Skating Club.
Sep 22, 2020 9:00 AM By: Mark Booth 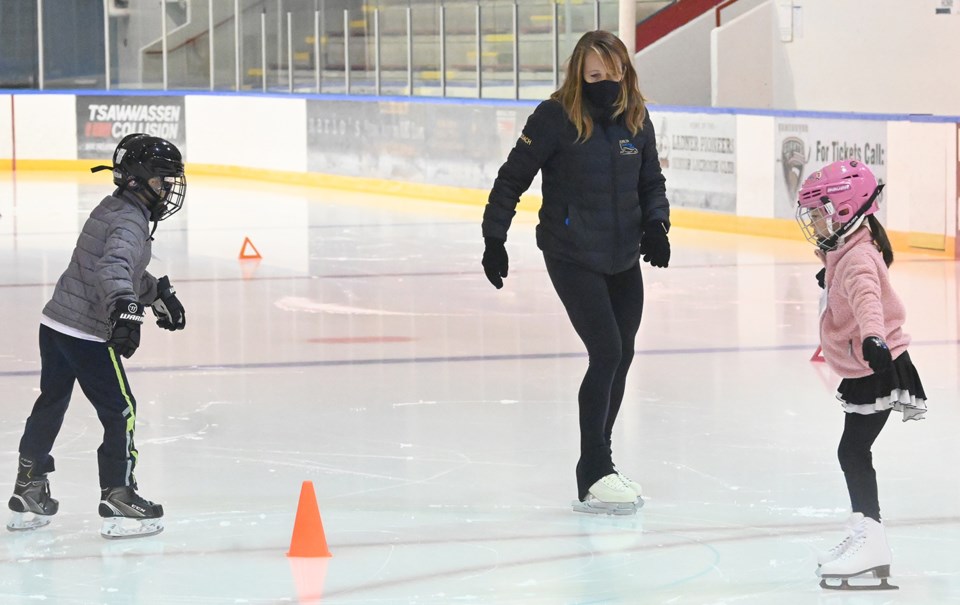 Smaller classes with more space and an opportunity to see your child’s progress from close range. What sounds like attractive selling features are actually the new reality for the Delta Skating Club.

The non-profit organization has launched its 61st season amid COVID-19 safety measures that include all programs being based out of the Ladner Leisure Centre. The popular CanSkate program can feature no more than 40 in the entire building and that includes coaches and off-ice volunteers. That number drops to 17 for the club’s competitive figure skaters.

Parents drop their kids off at the east side entrance of the building and volunteers oversee the check-in process until they are on the ice. It means the club needs more help than ever before, including president Christine Jerrett and vice-president Denise Skinner adding to their administrative workload. On this day they were assisting with one of the youngest CanSkate age groups.

“For us, one of the biggest changes is that the city allocated different facilities for different activities. Normally we are a combination of the South Delta recreation centre and here. Now we are exclusively here,” said Jerrett. “For this age group, getting volunteers is great as this is the best way to see your child skate.”

Jerrett has high praise for the support from the City of Delta which initially led to summer sessions for Star Skate figure skaters at Tilbury. That came after ViaSport had approved Skate Canada and Skate B.C.’s re-start plan back in June.

“Luckily Skate Canada and Skate BC were quite proactive. They had already started working on quite a bit of plans that were in collaboration with ViaSport. They laid out a frame work for all the skating clubs to pick up,” continued Jerrett. “We adapted it to our local arenas and worked with the City of Delta on the particulars. That really worked in our favour.

“The city has been phenomenal where when Skate BC and Skare Canada had their townhalls they actually joined us. They heard all the information and guidelines.”

The club has adjusted its allocated ice time at the LLC to offer all its regular programs. The current sessions run until December with registration still open by visiting the club’s website.