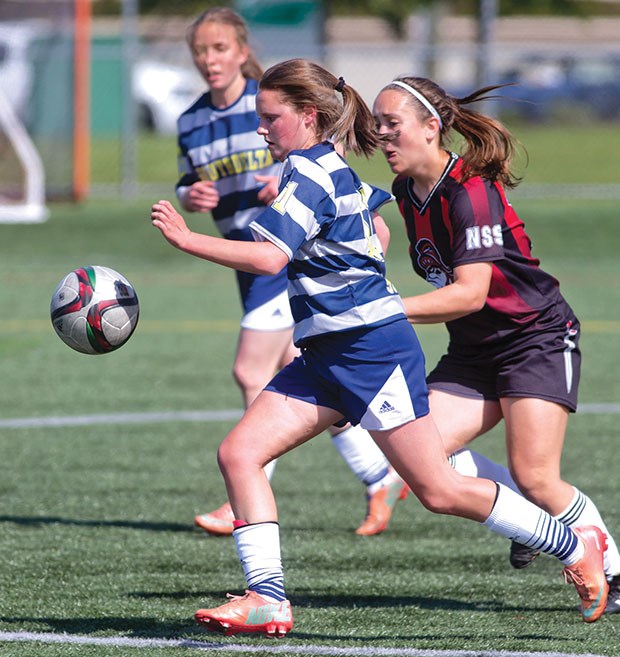 South Delta Sun Devils’ Vanessa Pecht races up field during her team’s 3-0 win over North Surrey at the Fraser Valley AAA Championships. The Sun Devils went on to secure a berth into the upcoming provincial AAA championships in Victoria.Gord Goble

It's the theme of the South Delta Sun Devils' season and it perfectly sums up their unprecedented 14th consecutive trip to the B.C. AAA Girls Soccer Championships.

The Tsawwassen school continued its remarkable streak with a 1-0 win in penalty kicks over Princess Margaret on Monday afternoon in a Fraser Valley playoff game filled with all kinds of emotion.

The result secured one of six B.C. berths that were up for grabs in the 16-team tournament and sends the Sun Devils to the provincial showcase event - May 28-30 at the University of Victoria.

After coming within a game of winning it all a year ago, South Delta was almost starting from scratch - losing seven key starters to graduation or other circumstances.

Longtime coaches Stephen Burns and Brent Sweeney inspired their young players by bringing them together to watch ESPN 30-for-30's Survive and Advance - the documentary on the late Jim Valvano leading underdog North Carolina State to the 1983 NCAA men's basketball championship.

The girls embraced the challenge and overcame a rocky start to the season to navigate the always treacherous Fraser Valley playoffs.

"(Stephen) is usually more negative than I am but even I thought at the start of the year it wasn't looking good for us," laughed Sweeney. "When we lost 4-1 to Fleetwood in our first exhibition game, we both kind of looked at each other and said we have some work to do."

South Delta locked up second place in league play that included a spirited 2-1 loss to No. 2 ranked Elgin Park. Still, the Valley playoffs were hardly a cakewalk. After a 3-0 opening round win over North Surrey, the girls dropped a tough 2-1 quarter-final decision to Coquitlam's Charles Best. That result put the Sun Devils in a do-or-die scenario the rest of the way. They got past Sardis 1-0, then outlasted a solid Princess Margaret team that was eager to earn its first B.C. berth in recent memory.

South Delta lost Vanessa Pecht to an apparent concussion that required additional medical attention. While paramedics were attending to her, Mia Simpson went down with what was diagnosed as a dislocated knee. Both players were taken to hospital. The remaining girls regrouped and went on to outscore their Surrey opponent 4-2 in penalty kicks.

"There was just so much going on, I didn't even know where to focus," said Burns. "Despite their age, our girls kept battling and battling. We couldn't ask any more from them. It was a great day for them and that's what this is all about."