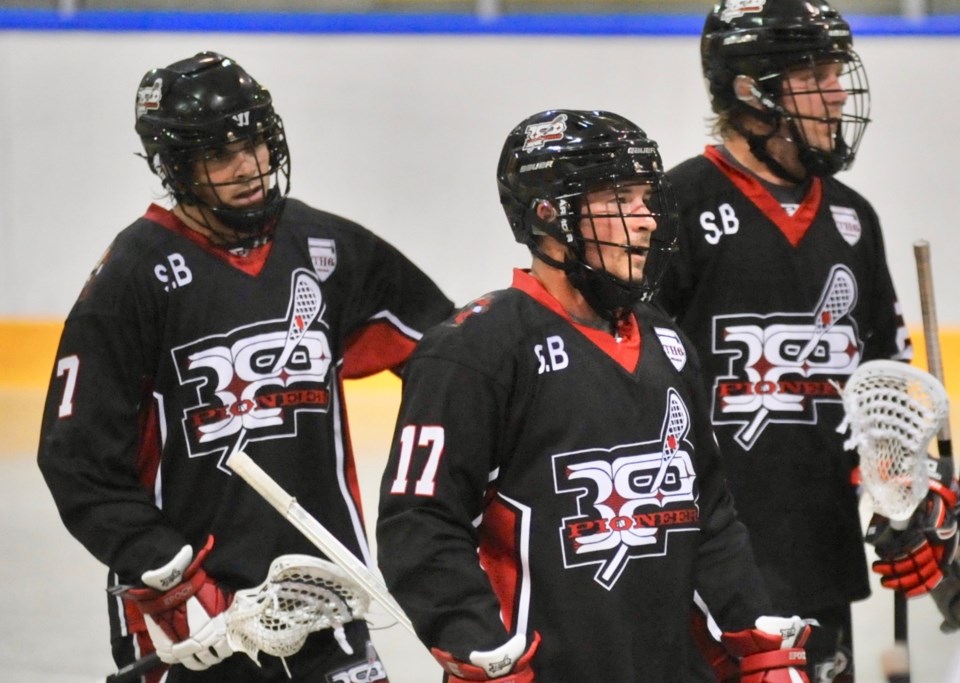 Ryan Benesch finished third in scoring at the President's Cup national championship despite missing one game. His Ladner Pioneers finished sixth in the eight team event with a 3-4 record.Mark Booth

The Ladner Pioneers will continue to chase their first President’s Cup title in 15 years and still counting even after being humbled at the national tournament in Quebec.

In a season that was all about winning the cup in the memory of former teammate Thomas Haydon, the B.C. champions bowed out of contention early by dropping three of their first four games in the eight-team event. They went on to finish with a 3-4 record and placed sixth.

It was the Pioneers third straight trip to nationals and, if Ross Frehlick has it his way, there will be at least two more over the next three years.

That means the club continuing to try and assemble the best team possible, even at the expense of local talent. Ladner has won national titles in 1998 and 2004 — the last B.C. team to do so.

“I’m not going anywhere,” said the longtime former player and now head coach. “I have no problem stepping aside from coaching (and focusing on just being a GM) if that what is needed. Our local (graduating juniors) need to be better and working to improve their games too. It’s as simple as that.

“The tournament returns to B.C. in 2022 and our intention is to host it. Next year is Edmonton so that is a good fit for us (financially).”

What the Pioneers have learned over the last three years is trying to win it back east is a daunting task.

They were overwhelmed by the quality of opposition back in 2017 but Frehlick thought that reflected an inexperienced team playing in the tournament for the first time.

They were much closer in Nanaimo last summer, with a narrow loss to the hosts in round-robin play going a long way to costing them a spot in the gold medal game.

The Pioneers were confident they were heading east with perhaps their best team ever that including three high-scoring Ontario imports and former Delta Islander standout Cody Hawkins who now lives in Calgary.

Frehlick knew his offence had to be better and it was, averaging over 12 goals per game. National Lacrosse League standout Ryan Benesch finished third in tournament scoring with 35 points despite missing one game.

What the team wasn’t counting on was being overwhelmed defensively in critical stretches that resulted in nearly 15 goals against per game — a stunning number for team that surrendered an average six during a dominant West Coast Lacrosse Association season.

Ladner was leading eventual champion Six Nations 8-4 in the second period of its opening game, only to be outscored 10-3 the rest of the way in a 14-11 loss.

A day later, an 8-7 first period lead against silver medalist Akwaesasne was erased when the Can Am champions scored 10 times in the second, on their way to a handing the Pioneers a 22-11 defeat.

Ladner rebounded to defeat Snake Island but day three losses to St. Albert (17-11) and  Capital Region (16-8) ended any chance of playing for a medal.

“Not sure if it’s player availability with the tournament being back east but it was way tougher than what we saw in Nanaimo,” added Frehlick. “Six Nations probably averaged 6-foot-3 and 250-pounds and they all had good hands too.

“It was really a combination of things —  from our defence struggling against top end guys, goaltending and our offensive guys not getting off the floor quick enough. Being up 9-6 against Six Nations with 15 minutes to go. That was the turning point for us.

“Did our league prepare us for the tournament? No it did not.”