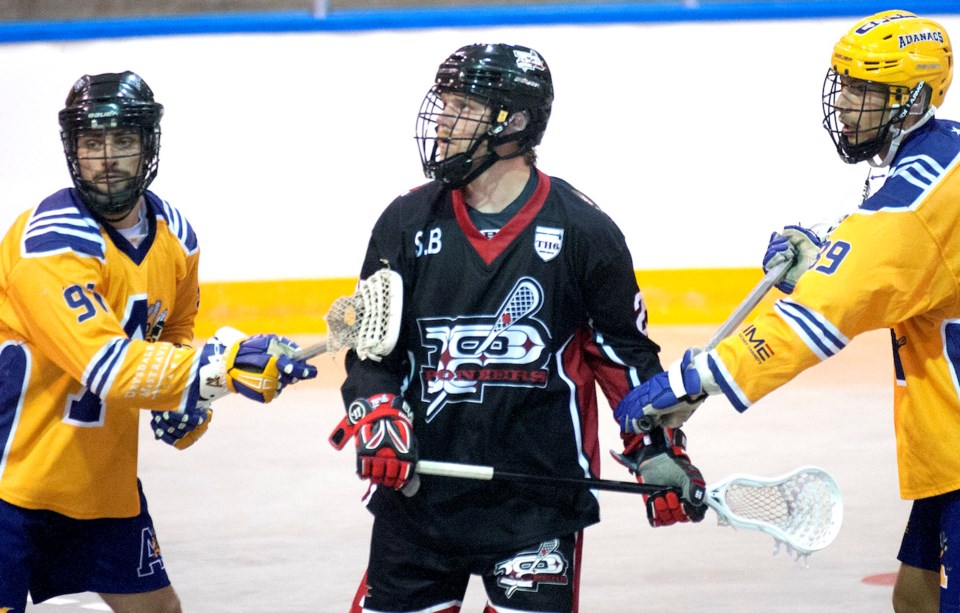 Ladner Pioneers are feeding their West Coast Senior Lacrosse Association opponents a steady diet of Ontario talent as they try to work their way back to the President’s Cup national championships for a third consecutive year.

Former National Lacrosse League star Luke Wiles made his Pioneers’ debut Saturday night, scoring four times in Ladner’s 14-8 road win over the Royal City Capitals. The 36-year-old Orilla native amassed 454 points in 119 NLL games over nine seasons. He last played in B.C. for the Victoria Shamrocks in 2009, piling up 75 points in 16 WLA games. The former Minto Cup MVP will play three more times for the Pioneers, including Wednesday’s first place showdown in Nanaimo before re-joining the club for the playoffs.

He is fresh off his National Lacrosse League season with the runner-up Buffalo Bandits and has played in B.C. before with the WLA Salmonbellies. The high-scoring lefty also enjoyed a decorated collegiate career in the field version of the game with Loyola University.

Delta Junior “A” Islanders alumni and now Alberta resident Cody Hawkins is expected to be in uniform this week. Former Calgary Roughnecks standout and Ladner native Andrew McBride was back on his hometown floor in the win over Coquitlam in what was likely just a one-game appearance.

The club is also looking to add two or three more key signings  prior to the July 1 roster deadline.

There are few intangibles behind the Pioneers’ aggressive recruiting.

They have dedicated the season to the memory of former player Thomas Haydon who lost his battle with pancreatic cancer last October at the age of 36. The Pioneers would like nothing more than to win the nationals in his honour for the first time since 2004 when Haydon was a team member.

They are also building on their experience of attending the past two national championships and knowing what is needed to contend for the title.

“Winning BCs is great but really it means absolutely nothing,” said Ladner head coach Ross Frehlick. “Winning the President’s Cup is what we are striving for. We knew going in to the season of what we have learned last two years and that’s we need to be better on offence. I think we are getting there.”

Before making travel plans to Montreal in August, the Pioneers have plenty of work ahead of them including a pivotal tilt on Wednesday in Nanaimo.

The defending WCSLA champions (8-2-1) handed the 9-1-0 Pioneers their only loss last month in Ladner. A win would put the Pioneers back in control of their own destiny with another return trip to the Island on July 13 to close out league play.

With the league now providing $20,000 to cover travel costs, teams no longer have to make an early commitment to attend nationals and the WCSLA champion will for certain be heading east.

That’s why the Pioneers are loading up their war chest to get their season beyond B.C.

The Pioneers host Royal City on Thursday at 8 p.m.