Two-time defending champion U17 Ladner Vipers a win away from returning to Coastal final
Apr 11, 2014 12:00 AM By: Mark Booth 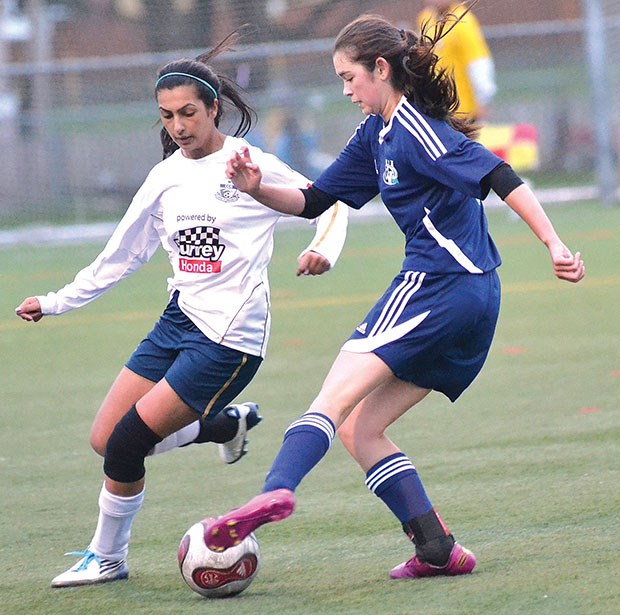 Ladner Vipers Claire Eccles makes a move on a CCB Elite opponent during Sunday’s Coastal “B” Cup quarter-final game at Holly Park. The Vipers came through with a 1-0 win.Mark Booth

In the girls' competition, the U17 Ladner Vipers find themselves in familiar territory. The two-time defending champions came through with a hard-fought 1-0 win over Central City Breakers Elite on Sunday night at Holly Park. The Vipers now travel east to face the Aldergrove Ambush on Sunday afternoon.

A win would guarantee a Provincial "B" Cup berth where Ladner was edged in last year's championship game. The Vipers have already captured the B.C. Coastal Girls Soccer League regular season and group one cup titles this campaign.

The U16 Tsawwassen Blues are also continuing their traditional strong post-season play. The girls rolled to a 3-0 home field win over Maple Ridge's West Coast Auto Group FC Outlaws, just 24 hours after blanking North Coquitlam 2-0. The victories set-up a showdown with archrival Chilliwack Attack this weekend in the Fraser Valley. The teams met last month in the league cup final with Attack coming through with a 2-1 win.

The Blues have bowed out in the semi-finals the past two seasons but have won play-in games to advance to the provincial championships in July. Last year, they earned bronze.

On the boys side, the U18 Tsawwassen Blues and U16 Ladner Celtic have continued their impressive seasons to reach the Coastal Cup final four. Both teams finished in first place in regular season play and captured the top group in District 5 League Cup play, while also prevailing in Delta District playdowns.

The Blues have enjoyed home field advantage through Coastal Cup play and came through with a 2-0 win over North Coquitlam Santos last Saturday. They now will look to advance to the final against the Guildford Force this weekend.

The Celtic are logging plenty of kilometres in their cup run. After opening with a 6-1 victory at Chilliwack, the boys returned home to defeat PoCo City last weekend. They now travel to Duncan on Saturday to face Vancouver Island champions Cowichan Valley Spartans.