Team practices in home arena for first time in months as it progresses towards game action
Sep 19, 2020 11:30 AM By: Mark Booth 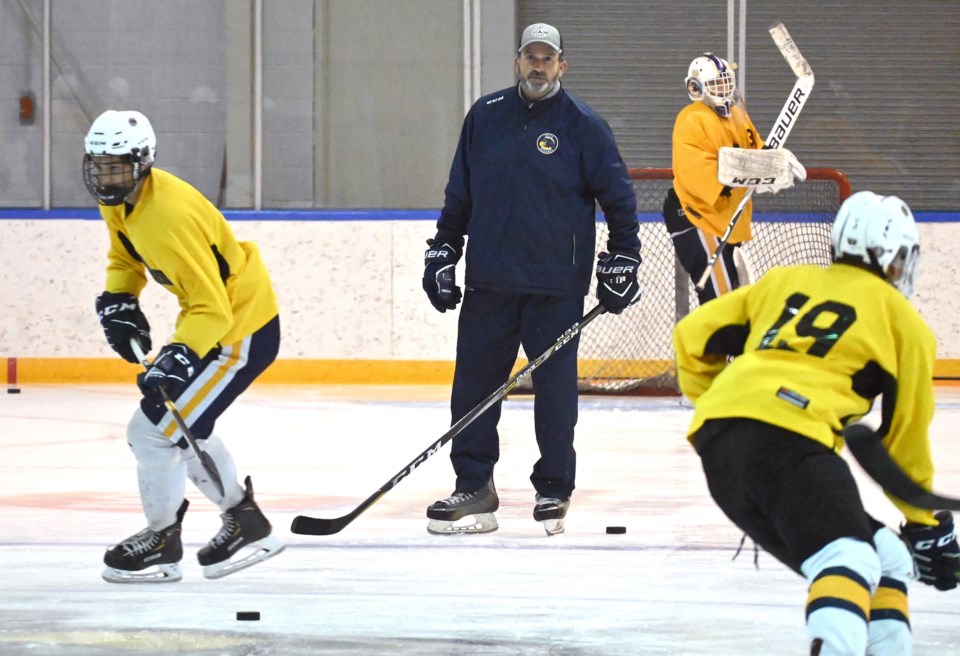 Delta Ice Hawks GM and head coach Steve Robinson had a chance to conduct his first practice at the Ladner Leisure Centre in months on Tuesday as the team continues to prepare for the upcoming PJHL season.Mark Booth

The Ladner Leisure Centre has never looked so good to the Delta Ice Hawks.

The junior “B” hockey team returned to their home arena for the first time since February as preparations continue for what they hope will be the start of the Pacific Junior Hockey League regular season in the weeks ahead.

Nothing was routine about the Tuesday night practice with lots of COVID-19 safety measures in place. The players put on much of their gear in the east side parking lot as dressing rooms remain unavailable. The session was also limited to just 20 players which is part of BC Hockey’s Return to Play plan. Still, it was a vast improvement compared to off-season skates a few months earlier that featured no more than eight participants and took place at a private rink in Langley.

“What I have tried to do is just keep framing it like everything we have done in our lives for the last five months,” said Ice Hawks GM and head coach Steve Robinson. “We have adjusted and followed the landscape of what we have been told with the Return to Play protocol. I just keep reminding the guys to reflect back to June when we began skating in Langley. This feels like a million miles away.

“From having eight man groups there to having my first team cohort practice (tonight) where I can have my entire unit on the ice without it being a split skate. Even that feels like progress.”

The Ice Hawks were slated to open the regular season on Tuesday, Sept. 29 at the LLC, but that start date has been pushed back as the PJHL’s Return to Play Committee continues to work with provincial and city officials to get approval to play games in cohort groups of likely three teams.

Hurdles that remain include how to maintain proper social distancing at the players bench and penalty box. With a maximum of 50 participants within the cohort for a game, the number is very tight considering it includes everyone from the trainer to the Zamboni driver.

“At the end of the day you do everything you can to minimize the risk but you can’t eliminate the risk,” Robinson added. “I have lots of concerns for sure but I think the progress we have done the last little while gives me reasonable hope. There is a motivation to try and make it happen and time will tell if we get over the line.

“Today is a bit of a milestone. Getting our first exhibition game sanctioned would be a huge milestone and I’m just trying to keep it in those bite sized chunks.”