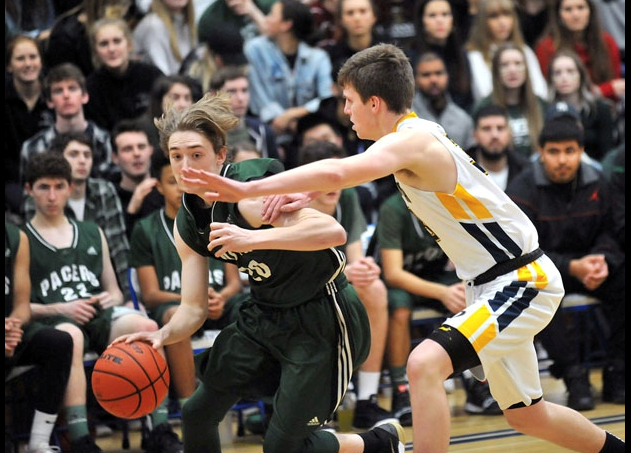 The Sun Devils and Pacers continue to play in different tiers but will meet in the new year for the annual Stebbings Murray Cup.Mark Booth

Playoff road trips will be a whole lot shorter, but the challenge to contend for provincial tournament berths remains immense for the Delta Pacers and South Delta Sun Devils basketball programs.

League play is now underway for all four senior teams as they work their way towards the post-season in February.

The Pacers senior boys team has not qualified for the provincials since 2010 even though its task was made easier when BC Boys Basketball introduced a new tier a few years ago. Delta has come within a game of advancing to the Langley Events Centre on a couple of occasions in the old Fraser Valley AAA playoffs.

Now the Pacers are part of the new South Fraser Zone, exclusively for Delta, Richmond and Surrey schools. It is expected to have three BC berths up for grabs.

While Surrey has just five teams at this level, Richmond is a hotbed with three in the current provincial rankings — McMath, MacNeill and Steveston-London. Besides the Pacers, Delta also features the reigning provincial champion North Delta Huskies who are now in rebuilding mode after their remarkable campaign last year.

Under second-year head coach and alumni Donovan Britten, the Pacers are part of the seven-team Sur-Del League.

Despite a rich athletic history at South Delta Secondary, the Sun Devils senior boys basketball team has never qualified for the provincial tournament.

What’s hurt their chances in recent years is competing at the AAAA tier for largest schools. Not being part of the ridiculously deep Fraser Valley Zone anymore will help, but the South Fraser region is hardly a breeze.

Surrey has a whopping 15 teams competing at the AAAA level — including provincially ranked Lord Tweedsmuir, Tamanawis and Fleetwood Park. Also in the mix for the first time in recent memory is the Seaquam Seahawks who handed the Sun Devils a 73-51 loss in Sur-Del AAAA League opener for both teams. The Sands Scorpions have also moved up to the top tier this season.

South Delta will continue its league schedule on Tuesday at Frank Hurt.

On the girls side, the Pacers and Sun Devils have been part of a growing trend that sees schools opt to play at tier two and avoid dominant teams loaded with full-time club players.

Both girls programs do, however, have some promising talent coming up at the Grade 8 and Junior levels.

For the past two years the Pacers and Sun Devils have been finalists in the Delta Grade 8 Girls playoffs, each winning a title. South Delta also reached the junior final last February before falling to Seaquam.

700
City of Delta replacing annual spring clean-up
401
'Do not make plans,' warns Henry in plea to stem Family Day travel
250
Letters: Closure of Delta Hospice is a tragedy for community
246
COVID-19 outbreak over at The Waterford
245
Safety prompts Delta to install no parking signs near Brunswick Point Trail