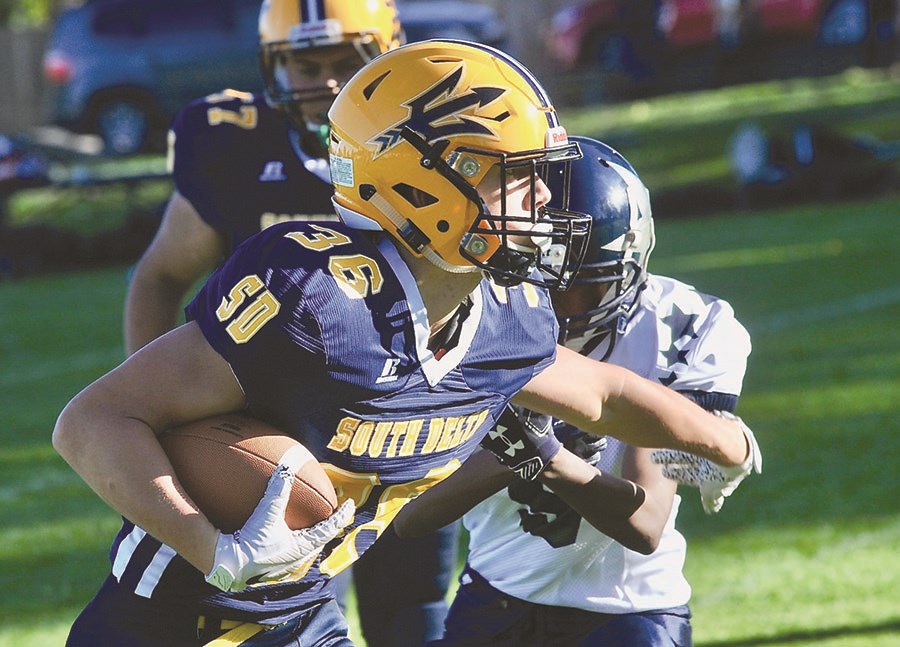 Running back Jesse Mitran is expected to have a leading role with the South Delta Sun Devils next fall. Mark Booth

How long has it been since the last time the South Delta Sun Devils played a home game in high school football? Key members from that No. 1 ranked team at the time will be entering their second-year at the University of Calgary come September.

The COVID-19 pandemic has kept the “Friday Night Lights” off for nearly 20 months but at last there is hope on the horizon as daily case numbers drop and B.C.’s Restart Plan enters another phase starting Tuesday.

Sun Devils head coach Ray Moon and his staff have been running weekly workouts this month that feature no equipment, no physical contact and plenty of social distance measures.

“This is basically the entire junior varsity team (from two years ago) that we are now working with,” said Moon. “They have missed that year of development so we are now accessing who we got and who plays at what position. These high school kids grow and change a lot in two years.”

The practices should change dramatically come late August when the program is expected to receive approval from BC School Sports to open a “normal” training camp and head into a full game schedule a couple of weeks later.

The plan is to travel to the Okanagan Aug. 28 for a combined practice with the Kelowna Owls. The Sun Devils will do the same with Eric Hamber the following week then prepare for their home opener when South Kamloops makes the trip to Tsawwassen in non-conference play Sept. 11.

South Delta will once again be part of the Western AAA Conference that is poised to be even tougher than previous years thanks to the shuffling of a couple of teams. The Carson Graham Eagles have been replaced by the St. Thomas More Knights, joining the Sun Devils, Vancouver College, Notre Dame, Mt. Doug, Seaquam, New West and Belmont.

Kenny Scott is penciled in to be the team’s starting quarterback in what’s expected to be a much different looking offence than in past years.

The potent passing attack that resulted in QB Ben McDonald and receivers Evan Paterson and Ethan Troniak taking their talents to Calgary and the Dinosaurs university program, will be leaning more on the ground game under new offensive coordinator Jerry Mullis. Running back Jesse Mitran is expected to be the featured back with some possible “surprises” according to Moon.

“We have a couple of rugby players who have never played organized football before but it will be very interesting to see what they can do once they have the ball in their hands,” added Moon.

The new-look coaching staff also includes former CFL and UBC standout Mike Emery who will be working with the linebackers, while alumni Spencer Smid will serve as a linemen coach, fresh off earning his doctorate degree as a chiropractor.

There will also be a familiar face on the sidelines with Bruce McDonald opting to return to work mainly with defensive backs. The McDonald family has made a huge impact on the program in the past decade with his sons Jack, Grant and Ben all having leading roles on the field. Grant was a second round pick of the Edmonton Elks in May’s 2021 CFL Draft.