Ice Hawk blueliner returns for his final year of junior

Sometimes a junior hockey career can feel like an eternity - especially when you make an impact as a 16-year-old. Magnus Cheung did just that as a member of the Delta Ice Hawks.
Oct 19, 2020 7:30 PM By: Mark Booth 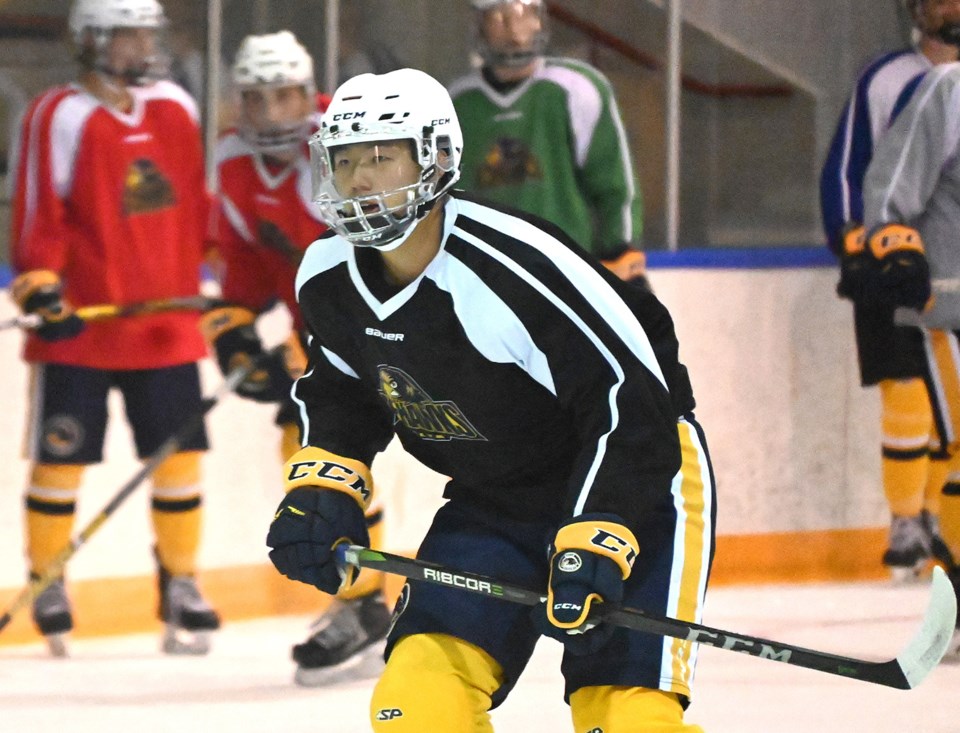 Defenceman Magnus Cheung has returned to the Delta Ice Hawks for his final season of junior eligibility after a two-year hiatus. Delta opens its schedule on Wednesday in Langley.Mark Booth

Sometimes a junior hockey career can feel like an eternity - especially when you make an impact as a 16-year-old.

Magnus Cheung did just that as a member of the Delta Ice Hawks. He logged huge minutes on the blueline as the Hawks made a run to the Pacific Junior Hockey League finals before falling to the Aldergrove Kodiaks. Just how long ago was that? His d-man partner was towering veteran Cam Cuthbert who is now in his fourth season as the team’s assistant coach.

After a two-year hiatus, Cheung is back in Ice Hawk colours for his 20-year-old and final season of junior hockey. Delta opens its cohort schedule on Wednesday in Langley. Its home opener is Tuesday, Oct. 27 against Langley. Along with defending champion North Vancouver, the same three teams will play against each other until the Christmas break.

“Cam and I were the top pairing and we got first unit power play too,” smiled Cheung. “The next season I didn’t have him beside me anymore and people started to run me.”

His sophomore campaign was riddled with injuries that included a high ankle sprain, a sprained ACL/MCL and a dislocated shoulder. The last one came in the opening game of Delta’s semi-final playoff series with the Richmond Sockeyes, ending Cheung’s season as the Hawks went on to win the league title.

His value as a BC Hockey League prospect remained high. Cheung was already affiliated with the Coquitlam Express and his former Delta coach Darren Naylor certainly was interested in him being a Nanaimo Clipper as well. Instead, he decided to step away from the game entirely.

“During tryouts I started to realize there were more important things that I had to deal with. I had to kind of choose going the school route because in the future I, hopefully, want to be a doctor,” said Cheung. I had to balance things, especially the schedule with the Express. It wasn’t really school friendly and I had a job and volunteer hours too.

“The injuries were also a part of it. They had taken their toll, just with the lingering aches and pains and stuff. I was still playing beer league and having fun because I just love hockey.”

Ironically, it was the COVID-19 pandemic that helped pave the way for Cheung’s return to junior. Now a third-year kinesiology student at UBC, his school-related volunteer requirements were postponed because of the pandemic.

“Most of my volunteering had stopped because of COVID-19, so I texted Steve [Hawks GM and head coach Steve Robinson] right away and he gave me the opportunity again, which I am really grateful for,” added Cheung. “I just love it.”

Part of the return was getting himself back into playing shape. He has dropped 35 pounds to get his weight down to 190 thanks to regular five km runs and workouts.

“It was also getting my cardio and muscles back into it,” he said.

Cheung believes the league has somewhat evolved in the last couple years since he last played with more of an emphasis on speed.

“I think it’s now smaller and faster. When you look at our team back then we were huge with Cam, (Mark) Trotman, Quinten (Wideski) and (Brad) Crompton. There is not as much hitting now, which is good for me,” Cheung said. “Especially the way I play as a more shutdown-type defenceman. It’s just so much fun to be back and I can’t thank Steve enough for the opportunity.”