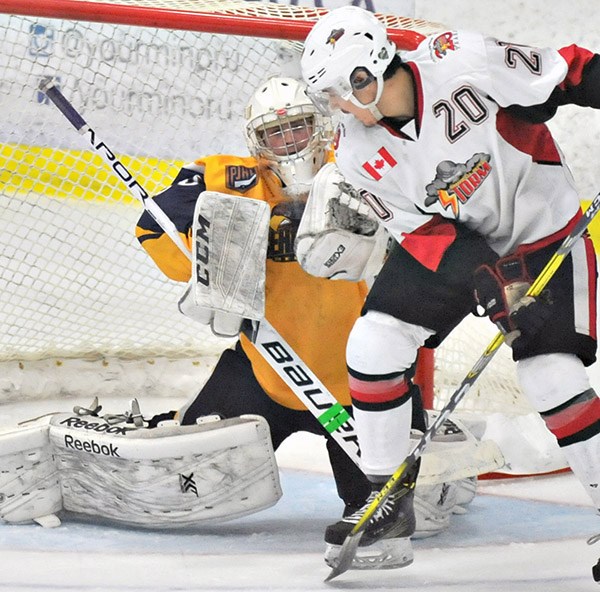 Delta Ice Hawks and Campbell River Storm squared off at the 2018 Cyclone Taylor Cup in Richmond. Delta hopes to bring the 2022 tournament to the Ladner Leisure Centre. Mark Booth/Delta Optimist

For a season that has brought nothing but frustration thus far, Eduard Epshtein can see light at the end of the tunnel. It just happens to be in the spring of 2022.

The Delta Ice Hawks owner and team president is hopeful his team will be able to host that edition of Cyclone Taylor Cup provincial junior “B” championships after the 2021 tournament, slated for early April in Ladner, was cancelled last week by BC Hockey due to the COVID-19 pandemic.

That announcement by BC Hockey wiped out all of Ephstein’s work with the City of Delta and other user groups to host the weekend showcase for the first time ever. However, the hope is his efforts were not wasted with the three leagues (Pacific Junior, Vancouver Island and Kootenay International) and BC Hockey initially agreeing the tournament should stay with Delta in 2022.

“The good news is all three leagues and BC Hockey are fully supportive of Delta being the frontrunners for next year. Obviously we have to go back to the city, get their feedback and just go through that whole process again,” said Ephstein. “If it’s successful, then we will be able to host it in 2022 and it will be the full experience for the players. This year we were looking at you can’t have spectators, you can’t even have a team dinner. It would have been nice to have, but it’s a lifetime experience for the players and you want it to feel that way.”

Ephstein needed the cooperation of Ladner Leisure Centre user groups and them to work with the City of Delta for arena time elsewhere for the 2021 tournament to proceed. The four-day championships take place at a time of year when the LLC is usually dry floor for the lacrosse and ball hockey season.

“The City of Delta has to be on side again and we don’t want to disregard that process so all user groups have to support it,” continued Epshtein. “It effects their schedules and the city did a really good job with it last year to minimize the impact.”

The cancellation of the Cyclone Taylor Cup actually helps the PJHL potentially salvage a 2020/21 season. The extension of the latest provincial health restrictions mean cohort play can’t continue until at least early February and teams can only practice. Now there is at least no cup deadline to determine a champion.

“It does give the league flexibility in that it opens up March, April and maybe even May. We can still have a meaningful second half of the season,” added Epshtein. “Arena availability may be an issue but with no spectators in place it’s an easier problem to solve with year-round ice facilities available.”

The Ice Hawks are at least training as an entire team again. Earlier health restrictions didn’t allow players from one health region to travel to another to practice. That had Delta running sessions in Richmond and Ladner at one point. When that rule was eased, another banned adult participation (19 and over) entirely. That was recently changed.

1621
Letters: People of Delta should not pay this bill
447
Dolphins Swim Club getting national and provincial attention
391
City of Delta cruise ship terminal could depend on Massey Tunnel replacement
344
Letters: Why is the word “God” still part of our national anthem?
330
Letters: How does the Premier feel about travelling to get his vaccine?