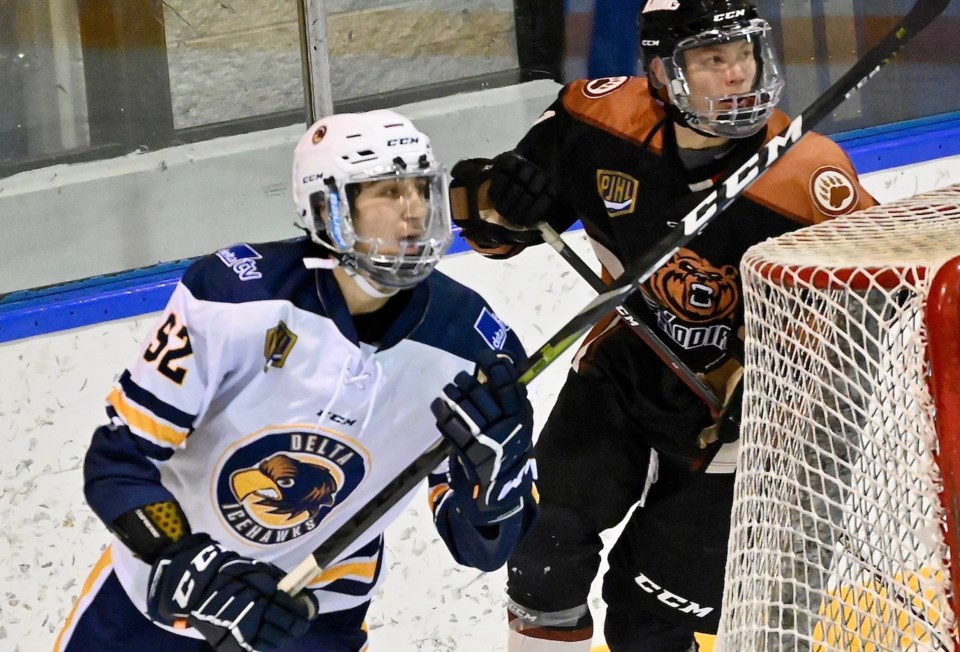 Marcus Pantazis will face his former team when the Delta Ice Hawks host the Richmond Sockeyes on Tuesday in Ladner. Game time is 7:35 p.m.Mark Booth

The Delta Ice Hawks and Richmond Sockeyes will continue their battle for the Tunnel Cup on Tuesday in Ladner — each looking to snap two-game losing streaks.

Coming off their biggest win of the season on Teddy Bear Toss Night — a 9-0 drubbing of the Aldergrove Kodiaks — the Ice Hawks (12-11-3-2) dropped back-to-back games on the weekend and are now just 4-6-0-0 in their last 10 contests.

They never could recover from a slow start in Abbotsford on Friday night, falling 4-3 to the 11-17-0-0 Pilots.

The hosts jumped out to a 3-0 lead after 20 minutes and held on for the win. Brice Kemp pulled the Hawks within a goal at the 2:59 mark of the final frame but they could get no closer despite a 15-5 margin in shots.

One night later at Centennial Arena, Delta fell to the White Rock Whalers for third time in as many games, 4-2.

A red-hot Kemp, with his fifth goal in three games, gave the Hawks a 1-0 lead after 20 minutes.

The Whalers equalized on a shorthanded breakaway goal in the second period by Mathew Bury and took the lead on early third period tallies from Ryan Doray and Michael Penman.

Marcus Pantazis, with his first as an Ice Hawk since being acquired from Richmond, made it 3-2 before White Rock added an empty netter.

The second-year Whalers (16-11-0-1) now have a four-point lead on Delta for fourth place in the Tom Shaw Conference.

As for the Sockeyes, a douse of hot goaltending resulted in coming away with just one of four points.

They fell 3-2 in overtime to the Langley Trappers on Thursday night at Minoru Arenas with the difference being the brilliance of Richmond native Ajeet Gundarah.

The 16-year-old showed why he is the leading candidate for PJHL rookie-of-the-year with a 55-save performance. The Sockeyes enjoyed a whopping 57-22 advantage in the shot department.

Gundarah, who helped Seafair win the Western Canada Bantam AAA Championship in 2018, is now 10-4-1 on the season with a 2.47 goals against average and .933 save percentage.

One night later in Ridge Meadows, Richmond outshot the Flames 36-25 but dropped another 3-2 decision.

The Tunnel Cup is awarded to the winner of the four-game regular season series. The teams earlier played to a 4-4 tie and Delta rallied for a wild 8-7 victory in overtime back on Oct. 24. The fourth and final meeting is Jan. 9 at Minoru. Game time Tuesday in Ladner is 7:35 p.m.

687
City of Delta replacing annual spring clean-up
392
'Do not make plans,' warns Henry in plea to stem Family Day travel
246
Letters: Closure of Delta Hospice is a tragedy for community
242
Safety prompts Delta to install no parking signs near Brunswick Point Trail
239
COVID-19 outbreak over at The Waterford