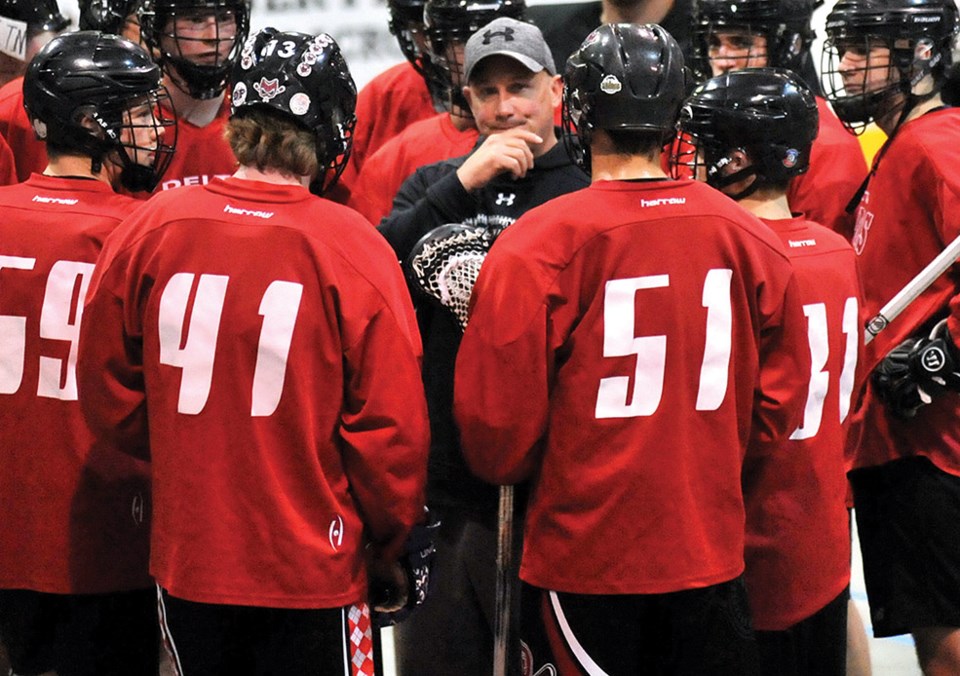 Delta Islanders co-head coach Kyle Goundrey was thrilled how Thursday's BC Junior "A" Lacrosse League draft unfolded. Now he hopes there will be a 2021 season. Mark Booth/Delta Optimist

It felt like a win for the Delta Islanders even though they haven’t stepped on a lacrosse floor for about 18 months.

Delta turned the No. 1 overall pick in Thursday’s B.C. Junior “A” Lacrosse League Draft into a pair of top prospects that should make an immediate impact. The draft is for graduated U16 players from associations not affiliated with BCJALL teams.

The Islanders switched draft positions with the Langley Thunder and selected Comox native Jordan Vincent with the No. 4 pick. The deal also landed them goaltender Braydon Washington who was selected No. 2 overall in the 2018 draft and is penciled in to share crease duties with returnee Ashton Leclair.

The trade also landed them future considerations which could come in handy at the league trade deadline if the club is in position to make a strong playoff run.

Islanders co-head coach Kyle Goundrey says Vincent would have been their choice even if they kept the top pick and is confident the Vancouver Island transition standout will launch his junior career with a Lower Mainland team. The perennial Team BC player is attending The Hill Academy in Ontario and Goundrey believes he is one of only two players selected Thursday with the ability and size to make an immediate impact in junior tier one.

“He is an athlete and realizes when you get to a certain age you really don’t have much of a choice anymore (on where you play),” he said. “We told him we were going to take him first overall and we’re just over the moon and so excited. His response is he was very happy to be representing Delta.”

The Islanders then turned to the powerhouse Ridge Meadows Minor Lacrosse Association to select Jaden Laberge (9th), Dylan Doucette (17th) and Parker St. Germain (25th). They were thrilled Laberge was still available and also had Doucette and St. Germain high on their pre-draft list. They will be re-united with former teammates Calum Munro, Connor Bouma and Chase Miller who were all selected in the 2020 draft.

“They are big, tough and pure athletes and that is what is so exciting,” said Goundrey. “I talked to them last night and they realized they get to play with their friends another five years. There was so much to the process that seemed to fall into place. It was a great night.”

Goundrey and co-head coach Andy Ogilvie are hoping the current provincial health restrictions are eased next month and the team can start pre-season training. COVID-19 wiped out the entire 2020 campaign but there is optimism there will be a 2021 season that will give Delta’s strong 2000-born age group a shot at enjoying some success in their final year of junior eligibility.

“We still haven’t even seen what they can do as actual junior age players,” added Goundrey. “Let’s hope we can go into the season without fans and by the time the playoffs roll around they can be there and the arena will be full. That’s what I am hoping and what I am preparing for. I have to be optimistic and these kids need it. They already missed one year and they don’t need to be missing anymore.”

1603
Letters: People of Delta should not pay this bill
440
Dolphins Swim Club getting national and provincial attention
353
City of Delta cruise ship terminal could depend on Massey Tunnel replacement
338
Letters: Why is the word “God” still part of our national anthem?
328
Letters: How does the Premier feel about travelling to get his vaccine?