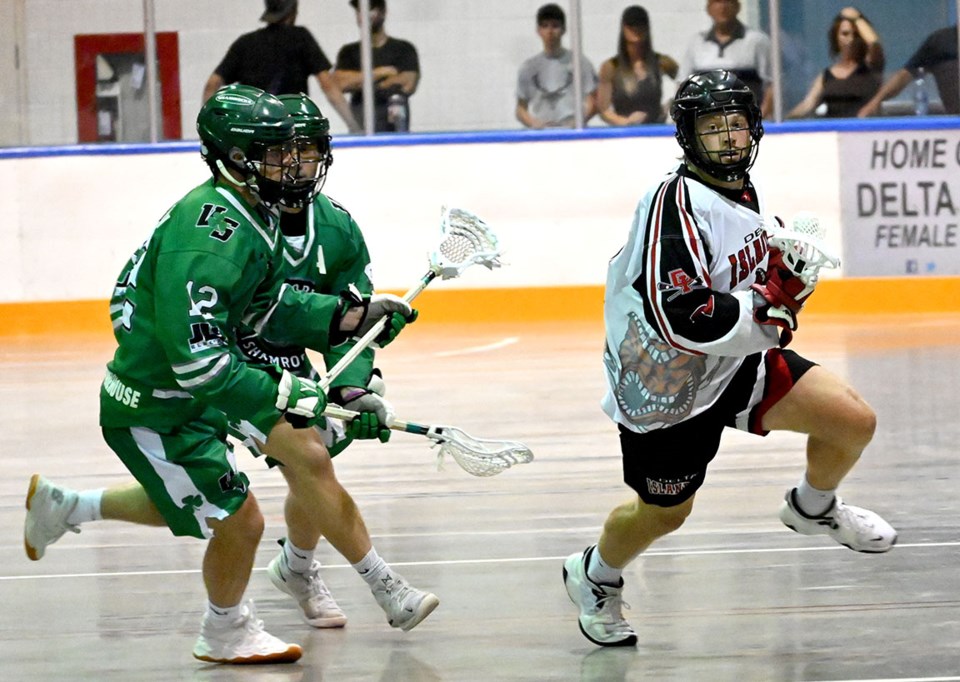 Ben McDonald heads up floor as the Delta Islanders hosted the Victoria Shamrocks on Sunday afternoon in B.C. Junior "A" Lacrosse League action at the Ladner Leisure Centre. Mark Booth

Delta Junior “A” Islanders co-head coaches Andy Ogilvie and Kyle Goundrey soaked in the long-missed atmosphere at the Ladner Leisure Centre on Sunday afternoon then soon became further aware there is plenty of work to do over the next 20 days.

Playing their first home encounter in over two years, thanks to the COVID-19 pandemic wiping out about 40 games over two seasons, the Islanders dropped a 20-7 decision to the Victoria Shamrocks in front of close to 300 fans at the LLC.

The loss came on the heels of a 16-7 setback to the Burnaby Lakers two days earlier, leaving the Islanders six games to play in their B.C. Junior “A” Lacrosse League Showcase schedule before abbreviated playoffs get underway in August.

Ogilvie, a hard-nosed defensive standout who was inducted into the Canadian Lacrosse Hall of Fame for his work with the New West Salmonbellies, doesn’t need to be reminded 36 goals against in two games is not going to get the job done.

Delta got off to a slow start then fought back to make it 11-7 after 40 minutes, only to see the Shamrocks fire in nine more unanswered goals in the third against an overworked Ashton LeClair. He was the team’s only dressed netminder due to an injury to Braeden Washington.

“Penalties hurt us a lot. I don’t know what the exact numbers were but it certainly seemed like we were shorthanded a lot,” said Ogilvie. “Especially against a team like Victoria that always has good sticks. You just can’t do that.”

“Right now we are giving them all an opportunity to show us what they got over the eight games. In playoffs, we will be shortening our bench. This is top level and you have to produce.”

On paper, the team does have a promising assortment of talent, from fifth-year Calgary Roughnecks member Haiden Dickson to 2019 B.C. Junior “B” Tier One League scoring champion Ben McDonald. The club has even welcomed back homegrown standout Jake Canton for his final year of junior and Mitch Sandberg, a member of the Ohio State Buckeyes field team, is also in the line-up.

However, the franchise hasn’t made the playoffs since 2016 and instilling a different attitude might just be the coaches’ greatest task moving forward. It starts Thursday in Langley before the New West Salmonbellies visit Ladner on Saturday at 7 p.m.

“Because we have had a couple of rough seasons, that first loss (on Friday) kind of put them back into that hole,” added Ogilvie. “They had just started feeling good about themselves and the loss can bring back the old memories and it compounds.

“We have a lot of talent in that room but that first game we played so far below what we are capable of. Today, there moments of competing then moments of dumb penalties. We now know we have a lot of stuff to work on.”