Ladner pitcher taking his career to University of Washington 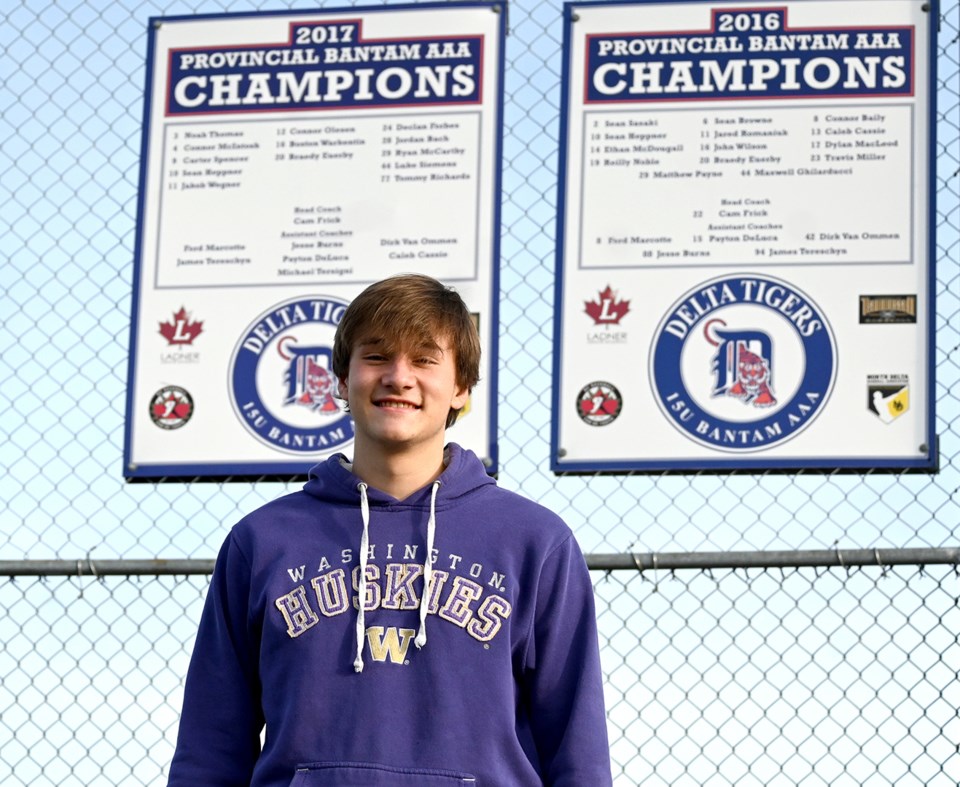 University of Washington bound pitcher Boston Warkentin paid a visit to Cromie Park over the holidays where his name is up on the backstop for helping the Delta Tigers win a provincial title back in 2018.Mark Booth/Delta Optimist

His parents are not Red Sox or Bruins fans but they are about become big supporters of University of Washington Huskies baseball.

Boston Warkentin has committed to the PAC-12 school and the Ladner pitcher will begin his NCAA Division One career in September of 2022.

“My mom wanted a more unique name. She was training for the Boston Marathon at the time, so that’s what my name is related to,” smiled the 17-year-old during an interview with the Optimist. (He has had to answer the question a few times). “She liked the name Austin and wanted it to be more unique. Especially being in Canada, it’s ‘are your parents Bruins fans?”’

At 6-foot-2 and 205-pounds, Warkentin was already getting the attention of US college programs last summer when his fastball velocity hit the 90-mph mark for the first time as a member of the Alberta-based Okotoks Baseball Academy U18 Black team. The video was sent out and the Huskies were soon calling.

UW’s alumni includes former Cy Young winner Blake Snell who was traded last week to the San Diego Padres after helping the Tampa Bay Rays reach the World Series where he was brilliant in two starts against the LA Dodgers.

“They were interested with how I was working my off-speed stuff too. Once they gave me that call it transpired pretty quickly,” said Warkentin, who has pushed his fastball to 91 mph in off-season workouts. “Once the border officially re-opens, they want to get me out there as soon as possible.

“I had a choice of Illinois State University too, but in regards to baseball, Washington has always been my dream school. It’s so close to home and being a PAC 12 school it’s pretty amazing. Having family and friends being able to watch me made the decision that much easier.”

Warkentin came through Ladner Minor Baseball then helped the Delta Tigers Bantam program win league and provincial championships before heading to the North Delta Blue Jays of the BC Premier League. He then decided to take his career east of the Rockies to Oktokos, a suburb of Calgary.

The Dawgs’ program has an outstanding reputation and facilities that attract players from around the country. Warkentin was billeted with a local family for his Grade 11 year and also was re-united with another local player — Matt Wilkinson — who went the Little League route with White Rock. Wilkinson will be continuing his career at Central Arizona College.

“Matt started talking to me about the Okotkos program. It definitely was something that I had to think about a lot and talk it over with my parents as I had never been away from home before,” Warkentin continued. “Honestly, I think it was one of the best decisions I have ever made. I am super happy with it. The people over there are awesome, the coaches, the teammates, just everything.”

Warkentin is now at the stage of his career where he is solely focused on being a pitcher. He was among the team’s top hitters during his time with the Delta Tigers.

“As I got better pitching, it made more sense. I think it has really helped me get to where I am,” he added. “But as a younger kid you shouldn’t be just pitching. You want to be as athletic as possible.”

The hope is the pandemic will ease off enough later in 2021 to have more of a normal baseball season after it was disrupted enough for Warkentin to re-classify himself as a 2022 college prospect.

“For schools like Washington, they had already done a lot of recruiting,” he added. “It’s opened up more scholarship money and I will just keep training in Okotkos and get better.

“They did a really good job working around the pandemic. I was able to get a fair amount of innings on the mound, thankfully.”