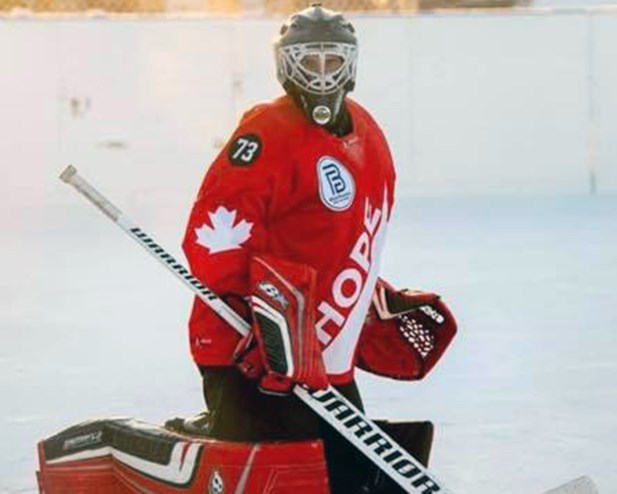 Andrew Buchanan has been spending much of this week between the pipes in frigid conditions among 40 participants in the World's Longest Hockey Game, a fundraiser for cancer researchFacebook

A Ladner native and former Delta Islanders lacrosse standout is braving frigid Alberta temperatures this week for a terrific cause.

Andrew Buchanan is among 40 participants in the seventh edition of the World’s Longest Hockey Game that began on Feb. 4 and wraps up on Sunday.

The game is taking place in an outdoor rink near Sherwood Park where nightly temperatures have been regularly dipping below -40C, with the wind chill factor.

It serves as a fundraiser to support life-saving cancer research at the University of Alberta to benefit patients at the Cross Cancer Institute.

Buchanan came through Delta Minor Lacrosse and played on the first-ever Delta Islanders Junior “A” team before moving to Alberta where he is a firefighter/paramedic for Strathcona County Local 2461, while raising his young family.

He is the first firefighter/paramedic to play in the event and has dedicated the game to all first responders who have been impacted by cancer. That includes his former Islanders teammate and friend Thomas Haydon who lost his battle with pancreatic cancer in October 2018 at the age of 36. Haydon was also was a Delta firefighter.

Buchanan’s hometown friends and Delta firefighters have stepped up to help his own personal fundraising campaign of $75,000. The Delta Firefighters Charitable Society donated $2,970 in Haydon’s memory, reflecting his regimental number with the department. Further donations for Buchanan’s campaign can be made here.

Much of his playing time this week has been spent between the pipes with up to eight hour “shifts.” It has taken wearing four UnderArmour base shirts and base pants to try and keep warm, along with electric heated socks.

576
Here's what real estate prices look like in the City of Delta
540
Your credit report may be wrong; here’s what to do about it
496
B.C. premier throwing cold water on COVID-19 vaccine clinic for North Delta
485
Ladner Baseball hosting used equipment drive for start-up league in Mexico
447
East Ladner motel has been buzzing with filming activity