Ladner's Paxton looking for bounce back season as a Mariner again 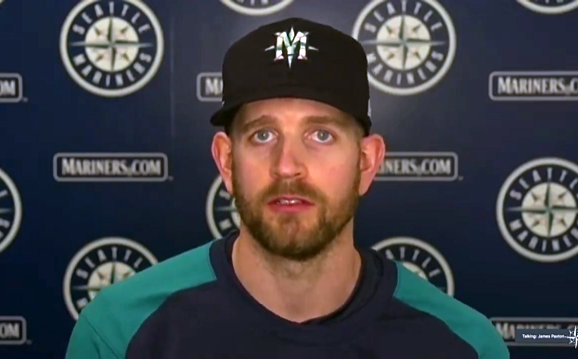 James Paxton found himself in familiar territory on Thursday afternoon in Peoria, Arizona.

The 32-year-old from Ladner was formally re-introduced to Seattle media after his one-year free agent deal with the Mariners became official following a physical a day earlier. Paxton signed for $8.5 million (US) and could earn as much as $10 million if he achieves all his performance incentives.

The left-handed pitcher returns to Seattle where he spent the first six seasons of his MLB career before being traded to the New York Yankees following the 2018 campaign. This was the first time he was an unrestricted free agent.

An injury plagued 2020 season dimmed hopes of a bigger and longer contract. Paxton worked just 20.1 innings, going 1-1 with a 6.64 ERA before being sidelined with a left flexor strain. He was also coming off back surgery last January.

“I’m comfortable here in Seattle. I love the group here and excited to be part of it,” said Paxton from the Mariners spring training facility.

“Going into summer camp last year I thought I was okay, but looking back at it now and looking at my mechanics, my back leg just wasn’t getting off the rubber very well. It was making my arm drag behind me and everything was moving slow because of that. It actually put my arm in a dangerous position and that’s what I think caused the injury in my flexor. Just my mechanics being off and not having my strength back to 100 percent. I really focused this off season on getting my strength back. I’m feeling really good right now.”

Paxton’s progress was showcased during a workout for MLB scouts in Bellevue, WA back in December. The Mariners were among 20 teams to take in the session. General manager Jerry Dipoto believes Paxton even took a “hometown discount” to return to Seattle.

“Knowing a lot of people in the scouting world, people sent their best evaluators to come watch him throw. My guess is they saw the same thing we saw,” said Dipoto. “Our impression was a little different because of our level of trust in James. Knowing his work ethic and how much James invests in his preparation is something we have a more intimate understanding of than most teams. We walked out of there with more comfort than any other team, truly. He is a top of rotation type starter when he is healthy and we believe he is.”

Paxton’s time with the Yankees included going 15-6 in 2019 and getting his first taste of playoff action. It included a memorable game five performance against Houston in the American League Championship Series.

“There are a lot of great people over there,” he added. “I learned a lot from CC Sabathia, guys like Zach Britton and Adam Ottavino. Lot of veterans. I got to work with (Ex-Mariner) JA Happ again and Gerrit Cole last year. Just learning a lot from those guys.

“Pitching in the post-season was fantastic. That was a great experience for me and just that extra pressure that comes with playing in New York.”

556
Here's what real estate prices look like in the City of Delta
526
Ladner Baseball hosting used equipment drive for start-up league in Mexico
458
Your credit report may be wrong; here’s what to do about it
407
B.C. premier throwing cold water on COVID-19 vaccine clinic for North Delta
385
East Ladner motel has been buzzing with filming activity