The first time Noah Thomas and Ryan McCarthy shared the same dugout was in Ladner Minor Baseball’s Mosquito House League. About a decade later they will continue to be teammates when they take their careers south of the border next fall.
Nov 24, 2020 5:01 PM By: Mark Booth 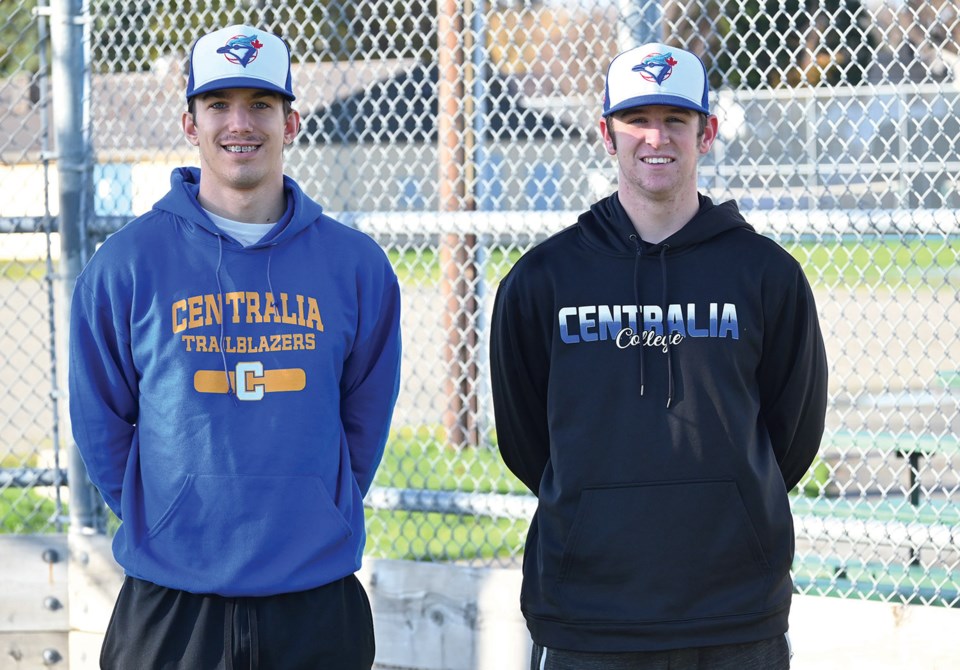 About a decade later they will continue to be teammates when they take their careers south of the border next fall.

The Grade 12 Delta Secondary students have signed their letter of intent to play at Centralia Junior College — a juco transfer program that plays in the Northwest Athletic Conference (NAC).

“It was right here at Cromie Park and I think it was second-year Mosquito,” chuckled McCarthy of their debut season. “The next year we weren’t actually on the same team but it’s been every year since then.”

The pair came through Ladner Minor Baseball then spent a couple of seasons with a very talented Delta Tigers Bantam team, before heading to the BC Premier Baseball League and the North Delta Blue Jays.

Thomas is a versatile talent who sees regular duty in the infield as well as the starting rotation. McCarthy has been a fixture in the Jays outfield and both players are expected to be in the heart of the batting order for the 2021 PBL season.

“Ryan has one of the sweetest (left-handed) swings you will see at this level. He also has great instincts in the outfield. He’s a guy who you love to have in your culture with his great work ethic and grinder mentality,” said Centralia head coach Kawika Emsley-Pai.

“Noah is a versatile hitter who uses his athleticism to play a multiple infield positions, including pitching. He has an exciting future ahead of him!”

The fact both players have secured their collegiate destinations is a reflection of their ability given the 2020 PBL season was essentially a write off due to the COVID-19 pandemic.

The Jays were just days away from their regular season opener when Provincial Health Officer orders shut down all baseball activity for about three months. It wasn’t until August when limited regional exhibition games were allowed and fall ball was extended into late October.

The boys can only hope 2021 will be different but you can’t blame them for being skeptical at this point.

Thomas should have been a key member of the Delta Pacers senior boys volleyball team and that season was also wiped out, while both can hope they will see limited play in the high school basketball season come January. Meanwhile, regular grad activities have also been postponed, including last month’s grad boat cruise.

Both committed to Centralia back in the summer. The two-year program has an excellent reputation of preparing players for the NCAA Division One level.

“Their coaching staff is very driven,” said Thomas.  “They really want the best for us and they don’t really necessarily care about team first. It’s more like make sure the players go somewhere after that school. I wanted to join and be part of that recruiting class.”

The NAC features games only within Washington State and already have a schedule in place for next spring. That was important to McCarthy.

“The NWAC is pretty close to home and we know that the league will be playing,” he said. I thought it would be a really fun experience.

“I loved the coaching there and the way he explained the program. The facilities looked really nice and I heard a lot of great things about the program.”