Women's softball program's new home field is on campus and named after its head coach
Dec 23, 2020 1:00 PM By: Mark Booth 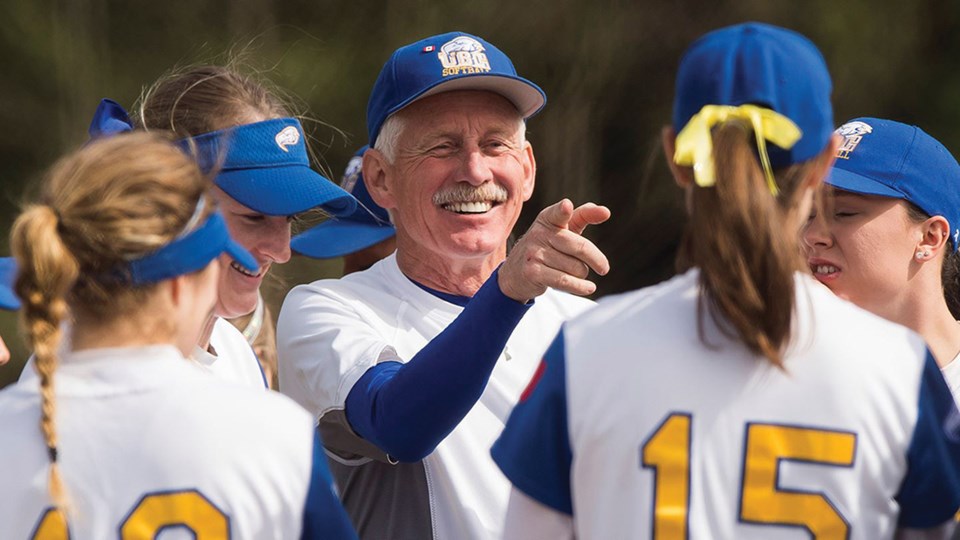 UBC's new Collings field is named after the women's softball program's head coach Gord Collings, a Delta resident who has been mentoring the game for decades. Richard Lam/UBC Athletics

It’s a fitting and lasting legacy to a Tsawwassen man who has given decades of his life to the game of softball in this province.

Gord Collings Field will be the new home of the UBC Thunderbirds with the impressive on-campus facility expected to be ready for play in late spring of 2021.

The project was made possible with support from the university, the Collings Stevens Family Foundation and a fundraising campaign spearheaded by volunteers from the softball community.

Collings took over as the Thunderbirds head coach in 2013, after he earlier launched a program at Douglas College and spent years as coach of the Delta Heat and South Delta Invaders teams locally. He also guided BC teams at the Canada Summer Games.

“It was totally unexpected,” said the popular former teacher and principal in the Delta School District. “It’s such a numbing experience to be recognized like that. (Laughing) I was speechless which was unusual for me.”

Collings played competitive baseball growing up and having three daughters made the decision to be a volunteer softball coach an easy one.

He coached his eldest two with Invaders teams at the rep “B” level then capped his time in Delta with an impressive run with a talented Heat rep “A” team that included his youngest daughter Paige. She went on to enjoy a standout collegiate career at Drexel University in Philadelphia and is now teaching at Delta Secondary.

It was members of Paige’s team that urged Collings to keep coaching.

“Not all the girls were going to big schools. They wanted me to approach Douglas to see if we could get a team there which is what I did,” recalled Collings. “We were a club team for two years then the school announced it was now a varsity sport and I would be coach. Then UBC called and here I am today.”

Collings’ run at UBC includes fighting for the team’s survival at one point after an overall “sport review” of varsity athletics recommended women’s softball be dropped.

Since their inception a decade ago, the Thunderbirds have been playing out of Softball City in South Surrey. While it’s a fabulous facility, the impact of now being able to run the entire program on campus will be huge.

Upgrades to the existing Nobel Field, located at the south end of the campus in Wesbrook Village, will include a resurfaced field, new dugouts, bullpens, bleachers and fencing. Collings Field at Nobel Park, will also provide close proximity to other UBC Athletics’ facilities.

“It’s a game changer. Not only in terms of the athletes being able to play in front of other students, but for the administration and staff to see and get an exposure to our game too,” continued Collings. “It’s difficult to drive out to Softball City on a Friday afternoon. Practicing and playing on our own field will be huge, and now when we are recruiting we can bring them out to look at our park and tie it all in. The girls are just ecstatic about that.”

The Collings Field announcement was shortly followed by news UBC will not be involved in cross-border Cascade Conference play for the second straight season due to the pandemic. The hope is putting together an exhibition schedule against Canadian schools only if COVID-19 numbers improve by the spring to ease current restrictions.

It means the Thunderbirds will have to wait until the spring of 2022 to show what they’re really capable of with a deep roster loaded with talent from 2001 Delta Heat and 2002 White Rock Renegades youth teams.

“Last season we got two weekends of league play in before having to shut down. It’s tough on the players and a big part of it is mentally too. It’s dealing with a lot of stress and anxiety using my old counselling background,” added Collings. “They have been working so hard, at UBC or on their own. I really feel badly for them. It was heartbreaking last year and it’s even worse now.

“They retain their eligibility but the logistics are they are going to graduate (sooner). I can’t say enough about their drive and passion. It’s a great group of girls.”