Mark Pearson now has another year on his road to recovery from a serious injury
Apr 2, 2020 6:00 PM By: Mark Booth 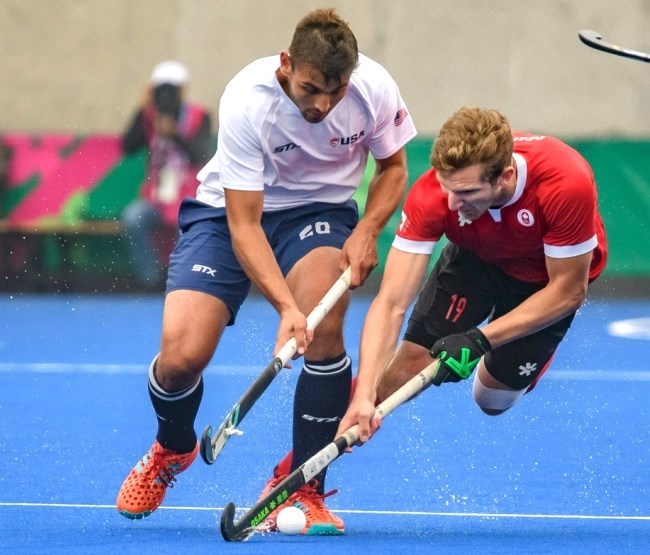 Tsawwassen's Mark Pearson is a key member of the national men's field hockey team who will now be extending his outstanding career to conclude at the 2021 Summer Olympic Games in Tokyo.Field Hockey Canada

Mark Pearson has eased off his rehab regimen for plenty of good reasons.

The 32-year-old field hockey standout from Tsawwassen was working his way back into form after rupturing his right Achilles tendon in the Pan Am Games gold medal game against Argentina last August in Peru.

Following successful surgery, his recovering timeline was somewhat tight to be close to 100 per cent for his third Summer Olympic Games.

He hoped to be running again in April and execute explosive sprints in May before resuming full training with the national team.

That timeline took a dramatic change when the Canadian Olympic Committee (COC) announced it would not be sending a team to the Tokyo Summer Games in July — a decision Pearson fully endorsed.

Tsawwassen's Mark Pearson is working hard to re-join his @FieldHockeyCan national teammates on the field in late spring https://t.co/Q2X7HoHFq7

Soon after the International Olympic Committee (IOC) announced the postponed of the Games, on Monday the new schedule was also finalized for July 23 to Aug. 8, 2021.

With all gyms now closed during the COVID-19 pandemic, Pearson is doing what he can at home to strengthen his leg, including stair climbing.

At least time is now on his side.

“It was very reassuring and relieving to see that the IOC took the appropriate step and postponed the Games,” said Pearson. “It was definitely the prudent decision from the COC as athletes were increasingly putting themselves in danger and going against health professionals in order to try and keep training in preparation for the Games.”

The Tokyo Games being held off for a year is also extending Pearson’s career.

He was planning to retire after his third Olympics. Now the Canadian team will have to come up with another international schedule — hopefully at some point in the months ahead.

“Obviously a big complication for many of the guys on our team as we have had July 2020 locked in our calendars for so long,” added Pearson. “I’m still definitely keen to keep going and represent Canada at my third Games. Just need to find some plans this summer now!”