Former Sun Devil standouts will play the final time in Vancouver together this afternoon against UBC
Sep 14, 2019 9:46 AM By: Jack Neumann 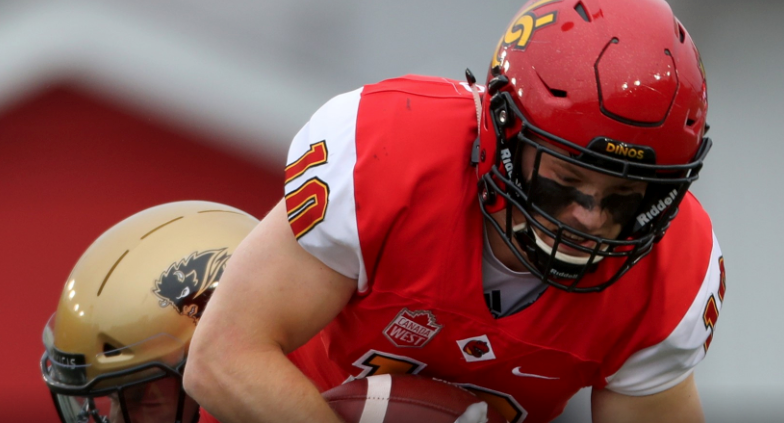 They play on opposite sides of the football and often face each other in practice. However, they share the same house, dine and go to and from practice together.

For the second consecutive season inside receiver Jack McDonald and middle linebacker Grant McDonald are on the same team and on opposite sides of the ball.

Both McDonalds attended South Delta Secondary. They played one season together, winning the 3A BC high school championship when Jack was a senior in 2014.

Jack, who joined the Dinos in 2015, is in his fifth and final season with the Dinos as an inside receiver in addition to being a superb special teams player. Grant, who is 26 months younger than Jack, is in his second year with the Scarlet and Gold, joining Calgary last year after spending 2017 at the University of Maine.

"It is great to go up against him (Jack) and having him on the team," the 6-foot-4, 220-pound Grant stated about trying to tackle his older brother in practice. Older brother Jack admits there is a competitive edge going up against his brother.

"Every so often he (Grant) will chirp to me across the line of scrimmage," said Jack, who was a U SPORTS Academic all-Canadian last year while taking courses in the Haskayne School of Business.

Twenty-year old Grant admits he will miss having Jack on the team next season, but the Dinos are wishing another McDonald decides to join them in 2020. Calgary is hopeful a third brother, Ben, commits to football, and if he does, it is the University of Calgary. Ben is a senior at South Delta and is an excellent lacrosse player in addition to being one of the elite graduating high school players at SDSS.

Football is in the genes of the McDonald family. Their father, Bruce, was a five year starter at the University of British Columbia in the secondary and captained the 1986 Vanier Cup championship team. He was drafted by the Edmonton Eskimos in the Canadian Football League draft but suffered a severe knee injury that ended his career. Bruce remains active in football, coaching community football and is an assistant coach with the South Delta Sun Devils.

Associate Head Coach and Offensive Coordinator Pat Sheahan has the utmost respect for Jack and Grant both as players and individuals.

"I knew both boys and the family from the recruiting trail. They are intelligent players, athletic, and old-fashioned football players that provide a physical presence.

"Jack is an excellent student, I should have worked a little harder at getting him to Queen's," joked Sheahan, who admits the Gaels' loss was Calgary's gain. "It is great to get to know them as people as well as football players."

Both McDonald brothers are excited about playing at UBC Saturday afternoon.

"It's always nice going back home to play in front of family and friends. I am super pumped up," stated Grant.

Jack, who won the University of Calgary Murray Fraser Award for a student-athlete that gives back to the community, expects another good game at UBC.

"It is always a good game against them."

The McDonald brothers are not the only pair of brothers looking forward to heading to the West Coast this weekend. Jalen and Tyson Philpot, who were high school standouts at Seaquam High in North Delta, will also be in the lineup for the Dinos.

Other graduates of the South Delta program on the roster for the Dinos are linebackers Charlie Moore and Jacob Kirk who were teammates of the McDonald brothers.