Even with the Western Hockey League delaying the start of its season due to COVID-19, it’s still a busy time for Lukas Svejkovsky.
Oct 14, 2020 3:02 PM By: Delta Optimist 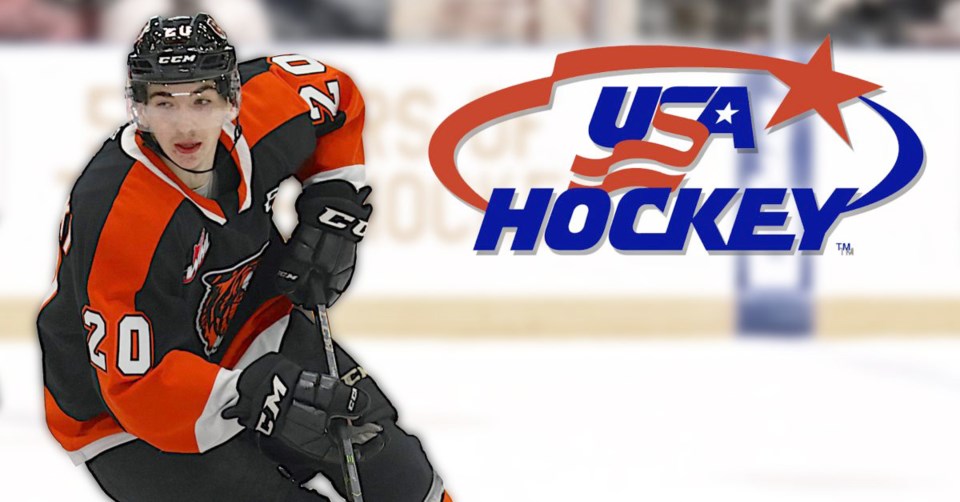 Point Roberts native Lukas Svejkovsky was among 42 players invited to the USA Hockey national junior team evaluation camp that wrapped up on Tuesday in Michigan.

Even with the Western Hockey League delaying the start of its season due to COVID-19, it’s still a busy time for Lukas Svejkovsky.

A week after being selected by the Pittsburgh Penguins in the NHL Entry Draft, the 18-year-old forward from Point Roberts was one of 42 players invited to USA Hockey’s National Junior Team Evaluation Camp that wrapped up on Tuesday in Michigan.  Over six days in the bubble environment, coaches, scouts and staff evaluated the players in contention to make the final 23-player roster for the US team that will be competing at the 2021 IIHF World Junior Championship in Edmonton.

Svejkovsky was among 15 2020 NHL Draft picks to attend the camp. After two days of practice, coaches and staff had their first opportunity to see everyone perform in five-on-five situations in a simulated two period game.

“We wanted to start things off right and talk about the identity of the team we want for this tournament,” said U.S. National Junior Team head coach Nate Leaman. “I watched games from last year and the year before, and looked for what in my mind what would win this tournament. These tournaments are very different, you get one shot against everyone, so you’re really game planning around the identity of your team.

“The competition here at camp has been great. “We told guys that we want to get to the net. We’re going up against some of the most elite goaltenders in the world. We showed guys clips individually of how we want them to play, and they went out during our evaluation games and showed us a lot. We learned a lot about some guys that are going to give us very difficult decisions to make.”

Svejkovsky is one of three WHL players invited to the camp. He will be playing his first full season with the Medicine Hat Tigers. The league is hoping to launch a probable bubble schedule in early December. He had 13 goals and 28 points in 34 games a year ago after being traded to the Tigers from the Vancouver Giants.