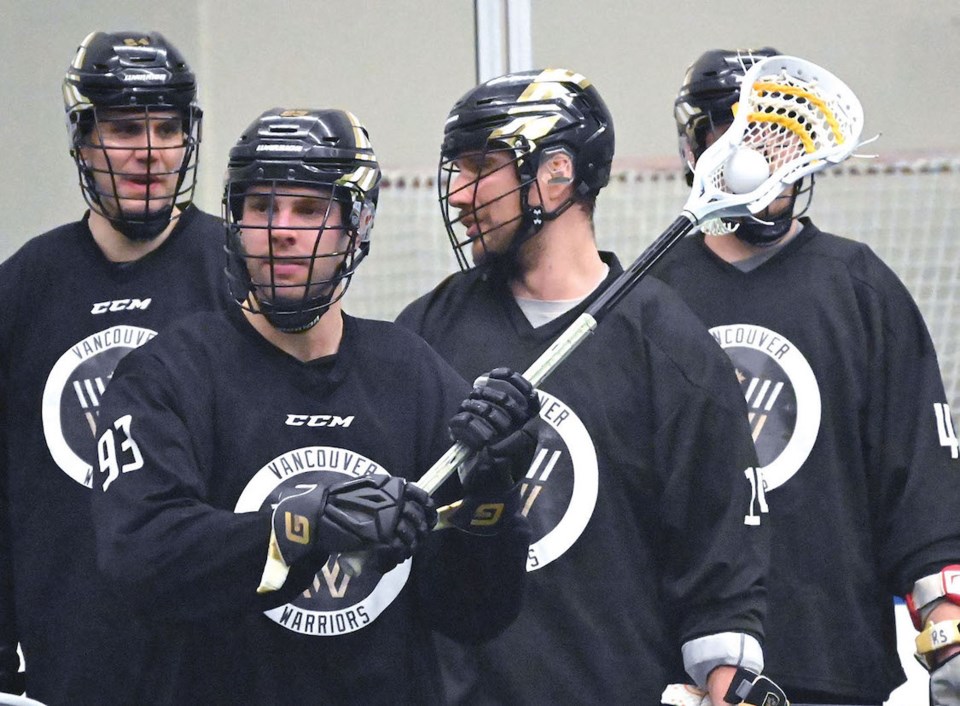 Ladner's Sam Clare is in his rookie season with the National Lacrosse League's Vancouver Warriors. The 26-year-old decided to become a full-time defender less than three years ago.Mark Booth

It was three years ago when Sam Clare decided a change of positions might serve him well to extend his lacrosse career. It has done much more than that.

The 26-year-old has established himself as an elite defender, becoming the second player from Ladner to crack the roster of the National Lacrosse League’s Vancouver Warriors where he is joined by veteran sniper Logan Schuss.

Clare did plenty of scoring playing on a wide variety of teams in the box and field versions of the game. It was preparing for another senior “B” season with the Ladner Pioneers when he decided to take his talents to the back end of the floor and perhaps avoid the injury list for a change.

“It seemed like each season for three years of junior and three years of senior I was breaking a bone every summer. A hand, thumb, ankle, something that not only keeps you out four-to-six weeks, but effects your job and daily life too,” recalled Clare.

“That’s when I started thinking about making that transition to defence. I always knew I was athletic enough and I could body guys. I had the skill set to grab the ball, take it up in transition and create opportunities.”

Clare thrived in his new role, so much so that Pioneers head coach Ross Frehlick thought he was the league MVP in helping Ladner win the West Coast title and advance to nationals in 2017.

Ironically, it was another serious injury that paved the way for Clare to take his new position to further heights. It was roughly two years ago when he broke his ankle playing for a men’s team in the Fraser Valley Soccer League.

He worked with Sungod Physio’s Christina Miller three times a week for about four months to get his ankle close to full strength. Clare then decided to go beyond his recovery by working with Douglas College strength and conditioning coach Jake Elder.

“When I came out of that I was in the best shape of my life. It was different mindset and different body type which created a completely different game for me,” said Clare. “I was able to get to loose balls a lot quicker. Get up the floor a lot quicker. Bang bodies harder.”

Clare helped the Pioneers return to nationals then set out to achieve new goals.

He attended the NLL Combine in the fall of 2018 and scored the highest among the prospects in fitness testing. He played last winter back east in the American Lacrosse League (ALL) and also did plenty of film work too while soaking in advice on what it would take to play at the pro level.

“It was doing everything to play in a higher calibre league. Going out to the box and practising. Writing everything down and watching more video. All about being a student of the game,” Clare continued. Guys like (former Junior Islander coach) Greg Rennie sitting me down and going over different offensive sets and how to defend them. It was a long process.”

Clare’s play in the ALL got the attention of Western Lacrosse Association teams. He earned a roster spot with the Burnaby Lakers and appeared in 17 of 18 regular season games. It was last August when Warriors GM Dan Richardson reached out and offered a contract.

Still he arrived at training camp as an undrafted free agent with nothing guaranteed.

“You feel like you are kind of a long shot. It was coming in every weekend, working hard and just chipping away at it,” added Clare. It doesn’t end. Just because you have made it it doesn’t get any easier. There is more film work and more practice. It’s has been fun and a great experience.”

There is another disruption in his lacrosse career on the horizon but it will be a good thing when he heads to a two-week boot camp in Texas next summer on his way towards a career as a firefighter.

537
Here's what real estate prices look like in the City of Delta
508
Ladner Baseball hosting used equipment drive for start-up league in Mexico
453
Your credit report may be wrong; here’s what to do about it
395
B.C. premier throwing cold water on COVID-19 vaccine clinic for North Delta
377
East Ladner motel has been buzzing with filming activity