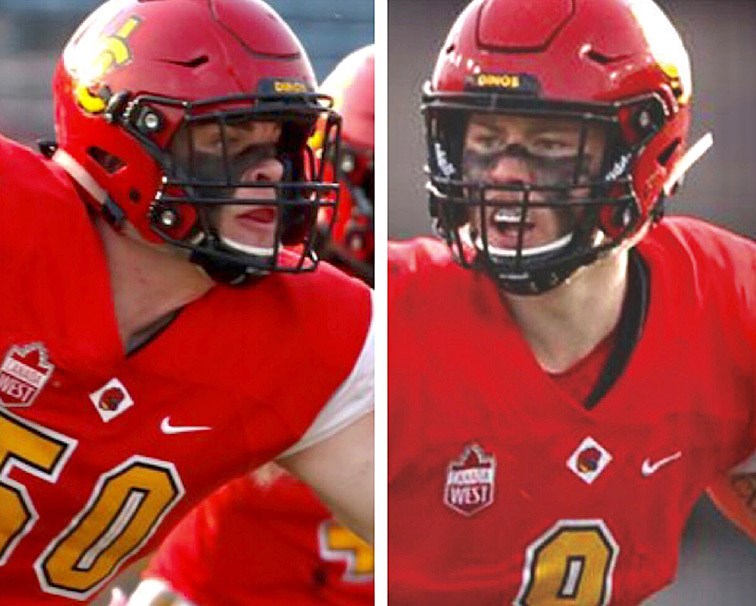 SDSS grads and Calgary Dino standouts Charlie Moore (left) and Grant McDonald have been invited to participate in the upcoming CFL Combine for the 2021 Draft. University of Calgary Athletics

A pair of former South Delta Sun Devils football standouts have earned invites to participate in the upcoming CFL Combine as top prospects for the 2021 draft.

Grant McDonald and Charlie Moore are among nine draft eligible linebackers to earn spots in the combine that will take place virtually this year due to the COVID-19 pandemic.

Combine testing, football drills and interviews will be conducted remotely through video and will replace the traditional in-person gathering of young prospects and football personnel from the league’s nine member clubs. Teams will have the option of conducting live player interviews online, reviewing prospects’ previous play on tape and gathering and reviewing medical, background and performance information remotely.

McDonald and Moore are among five members of the defending Vanier Cup champion University of Calgary Dinos to be selected. Both also had key roles in South Delta’s run to the provincial “AAA” title back in 2014.

The 6-foot-3, 225-pound McDonald joined the Dinos in 2018 after spending his freshman season at the University of Maine. He was a Canada West all-star in 2019 and a second team U Sports All-Canadian. He is listed 18th among the 2021 CFL Draft prospects. In addition to being a force on defence, McDonald was also used in certain situations on offence.

Moore was among Calgary’s top tacklers in 2019, earning Canada West player of the week in the team’s win over rival Alberta. The pandemic wiped out the 2020 USport football season.

Back in January, both were invited to attend the 2021 College Gridiron Showcase in Fort Worth, Texas.

The CFL Draft will take place in May.