Tsawwassen U18 and U17 girls teams crowned champions while Delta Coastal brings home a pair of titles on the "A" side too
May 2, 2016 10:28 AM By: Delta Optimist 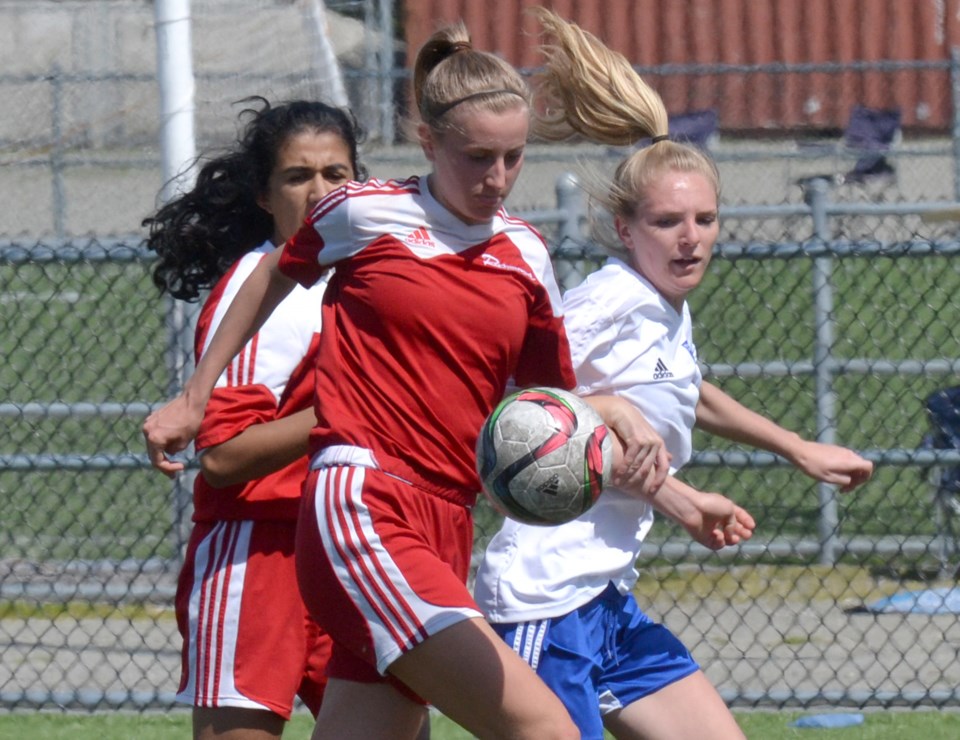 Tsawwassen Blues repeated as Coastal Cup champions, capturing the U18 title with a 3-0 win over RichmondMark Booth

A pair of Tsawwassen girls rep soccer teams will be heading to the Okanagan in July as Coastal Cup champions.
U18 and U17 Blues both capped outstanding runs in “B” cup playdowns with wins on Saturday in their respective finals in Aldergrove.
The U18 Blues repeated as Coastal champs with a 3-0 win over the Richmond Ravens. Tsawwassen took a 1-0 lead into halftime and added two more in the final 45 minutes to continue a superb run so far in 2016. The girls have yet to lose a game, earlier capturing the top flight of the B.C. Coastal Girls’ League Cup Championships.
The locals will now look to cap off an outstanding run through youth soccer at the Provincial “B” Cup Championships in July, making their fifth straight trip to the B.C. showcase event. The Blues won silver a year ago.
Meanwhile, the U17 Blues continued their breakthrough season with a dramatic 3-2 win in penalty kicks over Vancouver.
Tsawwassen was clinging to a 2-1 lead when Vancouver equalized in the late going. Following two periods of overtime, the teams went to PKs and Tsawwassen dominated, scoring on three straight attempts. Meanwhile, goalkeeper Abby Parson made two clutch saves and Vancouver’s third attempt rattled the crossbar, clinching the win for the Blues.
The result avenged a loss to Vancouver in the league cup final back in February. The Blues will also be heading to Penticton, making their first ever trip to the tournament.
Elsewhere, the Delta Coastal Selects continued their impressive run in the U16A boys playdowns with a 3-0 win over Langley United. The team will now look to duplicate its Coastal and Provincial Cup championships from a year ago, in Burnaby in early July.
The Coastal Selects were also victorious in the U15A girls draw as Delta trimmed Richmond FC 3-2. The locals broke a 2-2 deadlock with 10 minutes remaining.
In the U13A final Coastal fell 3-0 to Surrey FC Pegasus.
Both girls teams are also headed to provincials in July.