Paul Dhillon suiting up for Canada at World Medical Football Championship in Prague
Jun 30, 2018 10:00 AM By: Ian Jacques 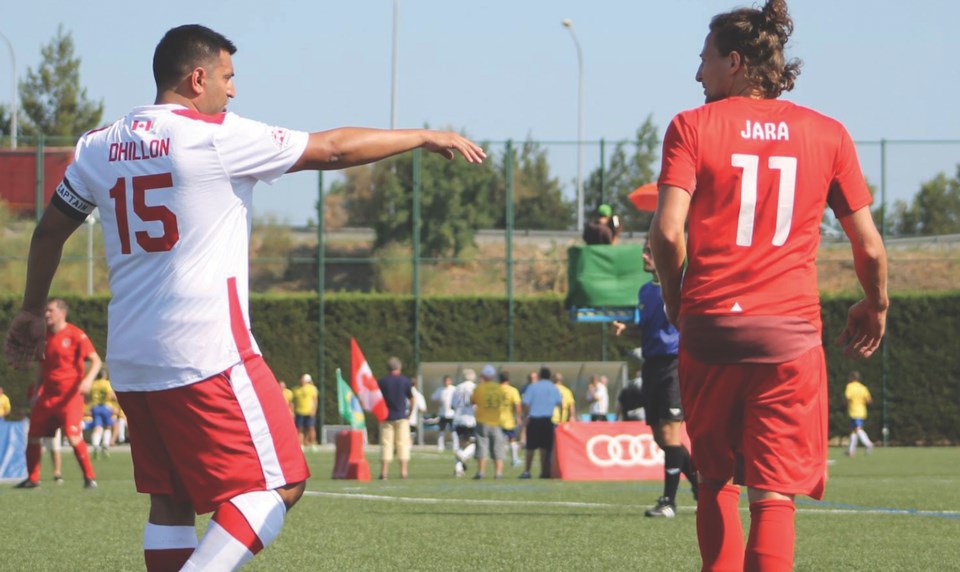 A South Delta doctor is lending his talents to the soccer pitch at the World Medical Football Championship in Prague.

Dr. Paul Dhillon, a South Delta Secondary grad, works at a medical clinic in Sechelt and at Sechelt Hospital. He grew up playing in local leagues in Tsawwassen and Victoria.

“I’ve never been a great player, but I’m a decent organizer,” he said.

At least 23 teams from across the globe will compete in the tournament, which is heading into its 24thyear. While off the pitch, assembled physicians participate in a sports medicine congress, which runs concurrently with the tournament from Saturday to July 8.

Spanish physicians founded the volunteer-run championship in Europe in the 1990s. Its popularity grew and by 2006 it went international. Today organizers turn down teams, said Dhillon.

That’s also the case for team Canada. He said 78 Canadian physicians expressed interest, and Dhillon, who manages the team. The current squad has players hailing from B.C., Alberta, Saskatchewan, Ontario, Quebec and Nova Scotia. Players had a chance to cut their teeth in Mexico where they attended a training weekend competing against Colombia, Mexico and the U.S.

Dhillon said he was struck with the idea to form a Canadian team after learning about the tournament from the Irish Medical Times email newsletter while attending medical school in Ireland.

“If it wasn’t for that one email, Canada wouldn’t have a team,” he said.

Team Canada consists of a handful of elite players, including two who almost played semi-pro and another who played for the reserve squad for Toronto FC.

“You really can’t have a full-time professional soccer career and study medicine. So it’s a neat chance for them to come back and play football,” he said, adding that the competition can get intense. “Anytime you get that many physicians who are all sort of type-A individuals … it’s pretty high quality football.”

There is no separate tournament for women, but mixed-gender teams are allowed in the secondary event for players 45 and older, called the Clemens Vogel Cup.

And if injuries do happen, they have a strategy for that – and options.

This will be the third time a Canadian team competes at the championship, said Dhillon.

“It’s an incredible feeling to have the Canadian flag on your chest and line up and sing the national anthem,” he added.

Dhillon graduated from SDSS in 1999 as a valedictorian.

A political science graduate of UBC, he studied medicine at the Royal College of Surgeons in Ireland and graduated in 2009. The following year he earned a diploma from the Royal College of Obstetrics and Gynecology, United Kingdom, and an International Red Cross certificate in health emergencies in large populations at Johns Hopkins University in Baltimore.

His professional credentials are as impressive as his academic ones.

The list includes editing a book - The Surprising Lives of Small-Town Doctors - and donating all the proceeds to charity. He served as a medical officer in the Canadian Armed Forces and as the senior medical authority for Ex Arctic Ram and Ex Arctic Bison.

He has also worked in Sierra Leone in an Ebola hospital with Save the Children.

— with files from Sophie Woodrooffe/Coast Reporter