Starting off on the right foot

Local soccer clubs making sure all coaches are on the same page at critical grassroots level
Nov 14, 2014 12:00 AM By: Mark Booth 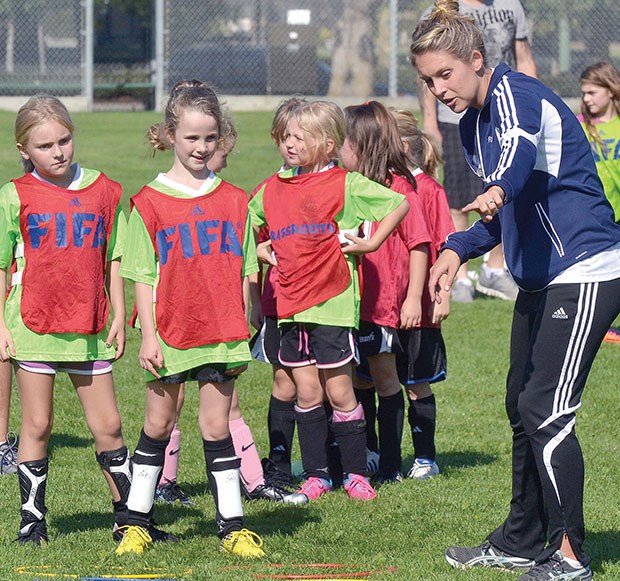 Forget about high performance leagues or academy programs. The most critical stage of a soccer player's career is at the grassroots level where the initial interest and potential passion for the game can be won or lost.

It's why local organizations are carefully overseeing the process, along with the guidance of the B.C. Soccer Association (BCSA), to ensure coaches are welleducated and on the same page for the task at hand.

The grassroots model of the Ladner Boys and Girls Soccer Clubs includes a month long technical development program to establish the best possible environment for coaches and players.

The first two weeks of the season for the U6-to-U8 levels were overseen by the clubs' staff coaches under the direction of technical director Russ Heggie. They set-up a jamboree format where BCSA's FUN skill stations were run for the players to rotate through. Parents and volunteer coaches helped and gathered ideas on activities that would be useful for their age group.

In the third week, staff coaches supported the club coaches who took on the lead by running a practice plan from the clubs' curriculum. The fourth and final week had staff and club coaches working alongside B.C. Soccer grassroots director Andrew Haines and tutors Rob Puni and Jack Torok in a festival atmosphere.

From that point, teams were formed and club coaches began running their own mid-week training sessions with games on the weekend.

"At the end of each month, throughout the season, we use a gameday for our staff coaches to once again support the coaches that run a practice plan from the curriculum," explained Heggie. "Coaches are provided with feedback and more ideas for running practices and game-days.

"Each team has a staff coach with them for the duration. During the season the teams also receive support at their gym times from staff coaches once a month."

Other educational tools, included a recent session, led by Heggie, at the new Dugald Morrison turf field that attracted 28 coaches who were introduced to more potential drills for their players. The clubs' are hosting an upcoming B.C. Soccer FUNdamentals' certification course and another education night on the Dugald turf is slated for January.

The clubs have also facilitated sessions for the U9-to-U12 and U-13-to-U18 age group coaches that have focused on conditioning, goalkeeping and tactics. They are held every six weeks over the course of the season.

"The commitment by our volunteer coaches is impressive," added Heggie. "They are coaching (at least) twice per week for seven months of a fall-winter season and also finding the time to attend our education sessions to make it the best possible environment for the players."