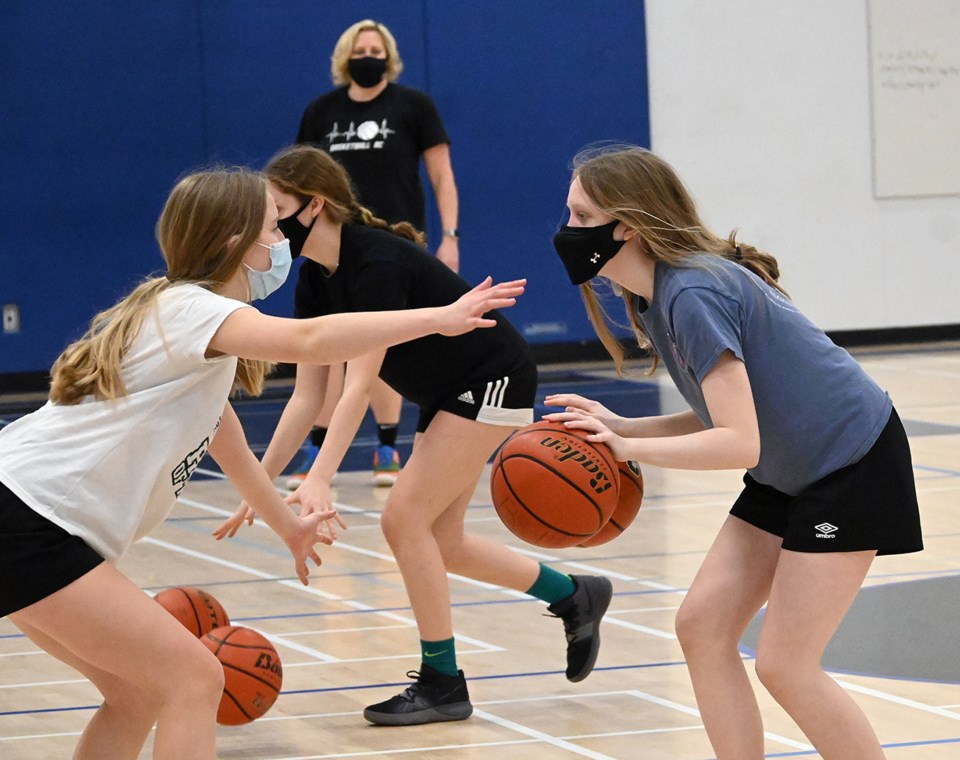 There are no games or playoffs in sight, but that hasn’t dampened the enthusiasm of the basketball program at South Delta Secondary School.

The COVID-19 pandemic continues to decimate the high school sports season. No games have been played since the start of the school year and students can only train wearing masks with no physical contact. Still, the opportunity just to be on the basketball floor again is being embraced by students and volunteer coaches.

Sharon Butler has been overseeing skill development with her Grade 9 girls group since the second week of January. Her sessions are almost like a party atmosphere with music, contests and prize giveaways.

She intends to continue the program well beyond the time the hoop season, which would typically conclude in early March.

“We really have focused on skills and having a lot of fun. It gives them a place to go and see their friends,” said Butler. “They are still in all these cohorts, so they see the same people (in classes). We play loud music and have lots of contests with prizes. It helps to get them to come back and be engaged. I have missed them.”

What the pandemic has done is put the sole focus on skill development at a time of year where coaches are typically more focused on game preparation. Every participating student is getting the same exposure.

“Usually during the season you are trying to develop skills, but also trying teach in-bound plays and things like that,” added Butler. “You don’t get the opportunity to do it as much as you want. Now we’re really getting a chance to break down the basics.”

As the pandemic closes in on its one-year anniversary, it means spring sports such as girls soccer, rugby, tennis, badminton, ultimate, golf and track and field are poised to miss their second straight season - at least at a competitive level.

“The hope is if community sports does open back up to say phase 2.5 that high school matches it,” said Sweeney. “When they had that in the fall we were still within our learning groups. We didn’t see that as fair. Even scrimmaging within our school would be welcomed. Right now everything is entirely distanced.”

He anticipates more interest than usual from students for tennis, badminton, golf and track and field that are mainly social distance and individual activities.

Ideally these sports could culminate with scrimmages against another school.

As for team sports, normal pre-pandemic practices would at least help set those programs up for 2022 given how much has been lost.

“It’s frustrating for us and the kids,” added Sweeney, who oversees a powerhouse girls soccer team at SDSS with Stephen Burns. “Traditionally we have those younger kids that become our leaders going forward. Our Grade 12s will likely missed that opportunity. I don’t even know the Grade 8s in the school right now. That will part will be a challenge (going forward).

“It’s a pandemic and there’s not much we can do. First and foremost is keeping everyone safe. Sports unfortunately comes second.”